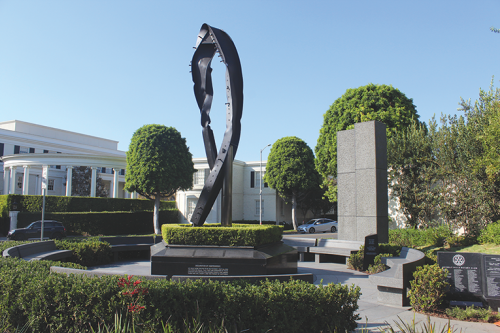 On Sunday, Beverly Hills residents, police officers, firefighters and council members will gather at the Beverly Hills 9/11 Memorial Garden for the city’s annual commemoration of the deadliest terrorist attack in United States history.

Following a roughly 20-minute “moment of silence” at about 6:45 a.m., the main ceremony will be held at 5:30 p.m. at the memorial garden in front of the fire station, said Fire Chief Greg Barton.

The ceremony will include a bagpipe performance, wreath laying, and two songs performed by the Beverly Hills High School Madrigal Singers, Barton added.

“Every year we’ve been remembering the firefighters and police officers and civilians who lost their lives,” Barton said.

The Beverly Hills 9/11 Memorial Garden was unveiled on the 10th anniversary of the attacks, Barton said.

The fire chief said that the event was “a bringing together of community, … an outpouring of support for those who lost their lives.”

The idea for the garden originated in 2009, after former fire Chief Tim Scranton acquired a 30-foot beam from one of the destroyed towers, according to the memorial garden’s website.

After Scranton’s acquisition, volunteers, from community service organizations to professional contractors, came together to form a committee and create a plan.

Folded in half to represent the destructiveness of the day, the beam, standing 18-feet tall, “serves as the focal point for the garden space and is encircled by substantial curved granite benches, allowing for contemplation and remembrance,” the website states.

It is also surrounded by a raised pentagonal planter onto which the names of all 2,977 victims are etched.

By continuing to honor those victims 21 years after their deaths, ceremonies like this ensure their memories will live on, Barton said.

“We will never forget those who lost their lives on Sept. 11, 2001, a day that changed the world and shook the heart and soul of every single American,” Beverly Hills Mayor Lili Bosse added.

Officials began planning the event months ago, and decided to limit attendance and stream the service to prevent any possible spread of COVID-19, Humphrey said.

“We regret that we were unable at this time to have a full public attendance,” Humphrey said, adding “we appreciate the outpouring of support and wish we could do more.”

The livestream will be archived for people who want to view it after its conclusion, Humphrey added.

Held at the Frank Hotchkin Memorial Training Center, which contains the largest remnant from the Twin Towers on the West Coast, the LAFD ceremony features speeches from family members of first responders who lost their lives, Humphrey said.

After the towers fell, more than 70 Los Angeles firefighters traveled to New York for rescue and recovery missions and to offer psychological and emotional support, Humphrey said.

“At one time, they were the only plane flying over the entire U.S.,” Humphrey said.

Snow White’s Larchmont cottage could be your wish come true