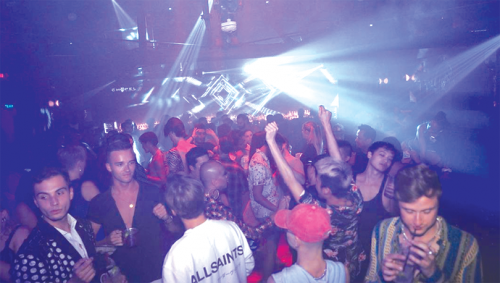 Clubs and bars in West Hollywood will not be extending hours anytime soon. (photo courtesy of the Abbey Food & Bar)

The West Hollywood City Council voted to support a state bill proposed by Sen. Scott Wiener (D-San Francisco) that would have extended the city’s alcohol servings hours to 4 a.m. as part of a pilot program in June. That state bill was defeated in the State Assembly on Aug. 24, rendering the council’s support moot. The pilot program would have also included San Francisco and Palm Springs.

“Senate Bill 930 is a limited pilot program to allow three cities – each of which asked to be included – to work with local stakeholders, including law enforcement, to decide locally whether to extend nightlife hours,” Wiener said. “SB 930 is a local control bill that lets cities decide what nightlife works best for their communities and small businesses. We are assessing whether there is a path to pass the bill off the Assembly floor.”

Wiener has proposed similar bills on several occasions, which have repeatedly been controversial to residents and community leaders alike. Prior to its defeat, Los Angeles City Council members Paul Koretz, 5th Distict, and Mitch O’Farrell, 13th District, expressed concerns over the bill.

“Since 2013 there have been five versions of bills authored by State Sen. Scott Wiener that would allow bars and nightclubs to extend drinking hours from 2 a.m. to 4 a.m., grossly endangering the safety of Californians and doing so without any added financial provisions to help boost public safety with compounded late-night drinking,” Koretz said. “I have worked to stop each one of these bills with the knowledge that Los Angeles would pay dearly in public safety and human lives for the profits of a few bars.”

“In an auto-dependent city and county like Los Angeles, serving alcohol for an additional two hours until 4 a.m. would undoubtedly result in an increase in drunk driving,” O’Farrell said. “That endangers the public, including the 13th District, which is directly adjacent to the city of West Hollywood, where this law would have taken effect. This legislation may have been well intentioned, but the Legislature was wise to act as it did.”

“I think California State Assembly members did the right thing by rejecting SB 930,” Meister said. “In a small city like West Hollywood, alcohol sales after 2 a.m. would have led to additional impacts on the neighborhoods. There are probably a lot of residents breathing a sigh of relief right now – particularly those who live within a block of our commercial corridors.”

Among the West Hollywood council members who supported the 4 a.m. bar bill was John Erickson, who noted that the focus for the City Council will continue to be on public safety.

“I understand all sides of the issues related to the 4 a.m. bill being killed (again) this year,” Erickson said. “While I disagree, now the focus that comes to mind for me is people who will leave the bar at 2 a.m. and then head to their homes and apartments and then cause further disruption to their neighbors that local cities will have to deal with. This places a further burden on law enforcement and our code officers. This bill gave cities the very local control we talk so much about but now have resoundingly rejected. We have to find ways to better work with the state instead of finding local cities in such stark opposition to statewide pilot project proposals that would benefit our business community.”

Councilman John D’Amico said that the bill would have allowed the city to have control over how alcohol sale policies were implemented.

“It was never clear that West Hollywood would adopt a policy allowing for 4 a.m. bar closures, but it was always clear to me that a state bill with flexibility and local control to implement as wished is something small cities should always support,” D’Amico said.

With the bill’s defeat, O’Farrell added that he would like to see the state legislature turn its attention to what he views as more pressing problems.

“I visited our state capitol just last week, and had several productive meetings with legislators,” O’Farrell said. “I’d like to see Sacramento stay focused on the larger issues of our day, like homelessness, affordable housing and the climate crisis.”

A Canter’s regular, from the other side of the counter, turns 80