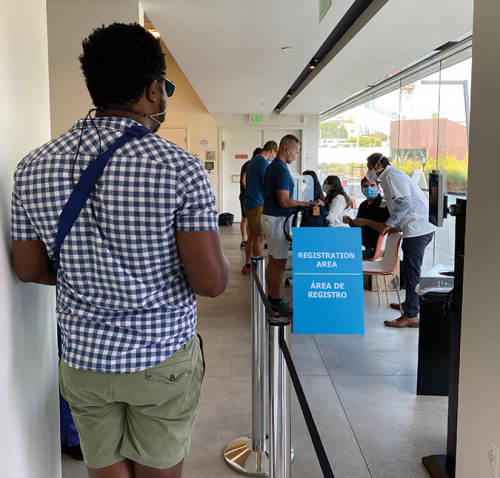 Monkeypox vaccinations are now available by appointment only at the West Hollywood Library. (photo by Rance Collins)

“In one of the biggest queer communities in the country, [I’m baffled] that this isn’t agenda item No. 1,” resident Jay Marcus said. “I’m just frustrated by the lack of information, by conflicting information, by having to get information passed on by random people through social media and just really the utter sense of helplessness.”

The opening of the West Hollywood clinic follows the Aug. 1 decision by Gov. Gavin Newsom to declare a state of emergency in response to the monkeypox outbreak.

“California is working urgently across all levels of government to slow the spread of monkeypox, leveraging our robust testing, contact tracing and community partnerships strengthened during the pandemic to ensure that those most at risk are our focus for vaccines, treatment and outreach,” Newsom said. “We’ll continue to work with the federal government to secure more vaccines, raise awareness about reducing risk and stand with the LGBTQ community fighting stigmatization.”

The move was praised by local leaders, including Los Angeles County Board of Supervisors chair Holly J. Mitchell, 2nd District.

“This proclamation is critical in helping us get ahead of this virus,” Mitchell said. “By declaring a local emergency, it allows us to cut through the red tape to better dedicate resources and educate residents on how to protect themselves and help stop the spread. It will also allow the county to quickly administer vaccines as more become available and to take the necessary efforts to obtain supplies and enhance outreach and awareness.”

West Hollywood Councilman John Erickson said that 85% of cases in the in the county were contracted in an area that includes West Hollywood. As of Aug. 1, there were approximately 400 confirmed cases reported in the county.

“It’s really important that we have vaccination sites here in the community where a lot of the new cases are going up,” Erickson said.

The new clinic will be available by appointment only, and those seeking vaccination have to meet the current criteria as outlined by the county health department. Its requirements state that the JYNNEOS vaccination is available for gay or bisexual men or transgender individuals who were diagnosed with early syphilis or gonorrhea in the last 12 months, have had sex with anonymous or multiple sex partners in the last 21 days in a commercial sex venue or other venue or are on HIV pre-exposure prophylaxis, known as PrEP.

On Aug. 2, the county added those who have had multiple or anonymous sex partners in the last 14 days, including engaging in transactional sex, to the list of qualifying vaccination candidates. Those who are immunosuppressed will be prioritized. Doses remain limited.

“I’m grateful to my colleagues and our staff … to address this issue in the community and to make sure that resources are here, right in our 1.9 square miles, as well as available to everyone in the region,” Councilwoman Lindsey Horvath said.

Mayor Pro Tempore Sepi Shyne argued that guidelines for vaccinations should be expanded, pointing out that, as a skin-to-skin contact disease, monkeypox could spread easily to other populations.

“Something that we learned through the pandemic is that our frontline workers, people who were exposed really on the frontlines, needed to get vaccines and needed equipment to protect them,” Shyne said. “I’ve really been thinking a lot about how … by skin-to-skin contact you get monkeypox, so thinking of people who work at spas, massage therapists, hotel workers … we have to help those folks and make sure that the vaccine is expanded to include those workers, because this can have you out for eight weeks. But there is no supplemental pay for these workers.”

The Los Angeles LGBT Center is also receiving a limited number of doses and has been involved with the county in addressing the outbreak. The center’s director of policy and community building, Joey Espinoza-Hernandez, said, however, that the overall government response remains lacking.

“Are there enough resources to really be able to address testing, vaccinations and treatment, and the answer is categorically no,” Espinoza-Hernandez said. “There just aren’t enough resources to be able to do that. Any additional person who gets monkeypox is another misstep in the health care system, and so the question will just continue to be, ‘Is it scaling up fast enough?’”

To pre-register for a vaccination, visit ph.lacounty.gov/monkeypoxsignup. When an appointment is available, the county will follow up with a text message with instructions on how to book a time. For information on the outbreak, visit ph.lacounty.gov/monkeypox. The West Hollywood Library community meeting room is located at 647 N. San Vicente Blvd.

The voice under the pillow