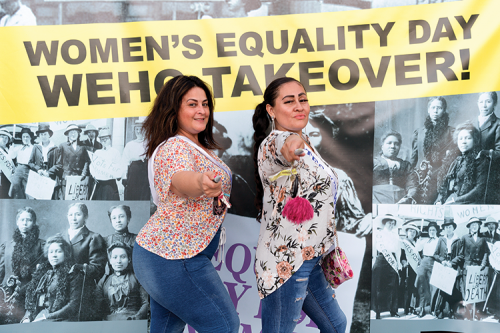 The city of West Hollywood and its Women’s Advisory Board will present the city’s annual celebration of Women’s Equality Day honoring the optimism, tenacity and unrelenting spirit of the people who worked to secure women’s right to vote, and to illustrate how much can be achieved in a democratic society by the collective efforts of citizens committed to political reform.

Women’s Equality Day – WeHo Takeover is a pop-up experience featuring signage and giveaways celebrating women mobilizing for equal rights and recognizing the anniversary of the 19th Amendment, which gave women the right to vote. It will take place on Aug. 27 from 6 p.m.-8 p.m. at the intersection of Santa Monica Boulevard and N. San Vicente Boulevard in West Hollywood. Community members can participate by picking up free sashes, buttons and other mementos, as well as by taking photos to share promoting voting rights, pay equity for women and support for the Equal Rights Amendment. Face masks are encouraged for attendees. West Hollywood businesses are invited to participate in the Women’s Equality Day – WeHo Takeover by displaying signage, sharing messaging and offering themed promotions. For more information, please visit weho.org/19th.

In addition to the Women’s Equality Day – WeHo Takeover, West Hollywood City Hall and the city’s lanterns over Santa Monica Boulevard will glow in the colors of purple and yellow in recognition of the women’s suffrage movement.

For more than two decades, the city of West Hollywood has commemorated Women’s Equality Day in a variety of ways. The city of West Hollywood was the first city in the nation to declare itself pro-choice, and it has continually supported state and federal legislation protecting and advancing women’s reproductive rights and access to healthcare. The city supports the passage of the Equal Rights Amendment and has a strong record of supporting initiatives that call for equal pay for equal work. The city’s Women’s Advisory Board is involved in a myriad of programming and events that recognize and support women in the community.