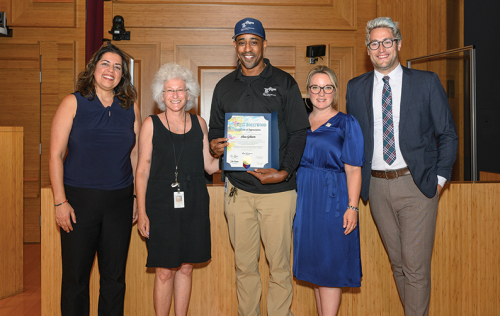 In July, following reports that Block by Block operations manager Shea Gibson was convicted in 1995 of voluntary manslaughter in Georgia, members of the West Hollywood City Council and other public officials came out in support of Gibson. At the Aug. 1 council meeting, the city made its support of Gibson official with a proclamation honoring the ambassador.

“To know Shea and his dedication to our city, to our businesses, to our residents is something that is exemplary,” Councilman John Erickson said. “We are lucky to have someone with such dedication to public safety, but ultimately someone that has such deep care for our community here. I’m not going to relitigate the horrible things that have been said about someone with such upstanding value and honor in this community, but it goes without saying that on behalf of all of us sitting up here … and to all of those people that you have truly made sure that they felt safe in our community, we owe you a debt of gratitude, and we want to say ‘thank you’ from all of us to you.”

“I want to say that Shae Gibson is an amazing citizen, and we in the business community are grateful to his service,” Morrill said.

Gibson has been with Block by Block since 2013, working the majority of that time in the city of West Hollywood. His criminal record was revealed by local media blogs, and the Washington Examiner featured an interview with Los Angeles County Sheriff Alex Villanueva, where he said the City Council of West Hollywood doesn’t “bother vetting who they replace cops with, so they settled on a convicted murderer.”

The information came out following the council’s June decision to replace four sheriff’s deputies over six months with 30 Block by Block unarmed ambassadors. Public safety and how to tackle the issue had been heatedly debated by the community for months. Even at the Aug. 1 meeting, public commenters continued to weigh in on the issue.

“Tonight was really important because we as a community rallied around Shea Gibson,” said public safety commissioner Kerri Balbone, who did not support the commission’s recommendation earlier this year to cut funding to the sheriff’s department. “Shea has lived his life to make up for probably some things that he regrets, right? I repeatedly hear people come to this chamber and talk about the sheriff’s department, as if they are one organization or one group who all have the same behavior. I think if we are going to extend empathy and consideration, we need to do that in a balanced way.”

“We seem to be kind of digging ourselves out of a hole with the whole Block by Block, which is unfortunate, and I keep telling friends and residents about what a great service they’ve provided to us over the years on the east side,” resident and former Councilman Steve Martin said. “Because a lot of the people on the west side and center city haven’t developed that relationship, we haven’t had the deployment. I’ve encouraged the neighborhood watch groups, but also, I’m hoping that council and our public safety office can work closely with the neighborhood watch groups to integrate Block by Block into the community on that side of town.”

“I believe that a community is truly safe when its people have good jobs – social services like we have here in West Hollywood, mental health care, stable housing,” resident Danielle Wilson said. “The council’s actions on raising the minimum wage, fighting for affordable housing and now reimaging public safety embrace the same vision.”

Erickson, Councilwoman Lindsey Horvath and Mayor Pro Tempore Sepi Shyne all addressed the online public discourse that followed the council’s decision on the public safety budget, which they said resulted in “hate speech” and personal attacks against the council members, public safety commissioners and ambassadors like Gibson.

“It’s OK to disagree, but before you start typing some hate speech to someone because you’re angry, just remember what you want the future to be, [and] take some time to reflect,” Shyne said. “There are so many avenues to reach us. I know all of us here on council are very responsive. We meet with folks. People reach out to me, and I make meetings with them. I am so open to hearing from you all. You can come to publicly speak. You have an opportunity to send in a public comment. It is your right to write a comment, write an op-ed. That is the beauty of America. And the ugliness is the sickness of adults bullying others, spreading hate, making threats, and that is absolutely hurtful, unacceptable and something that we all as a community need to continue standing up for.”

Gibson, meanwhile, expressed gratitude to the council for his proclamation.

“I do appreciate everything that you all have been able to provide me with here, as far as a canvas to kind of create art, as far as in the safety realm,” Gibson said. “We definitely try to do the best that we can here, and we will continue doing that. I do appreciate this so much, so does my family. I also want to thank all the people who have shown me support through this situation that we went through here, if you will, but I want to thank all of the council members.”

In conjunction with honoring Gibson, the council also gave a proclamation to Block by Block, which read in part, “Block by Block security ambassadors are proactive, welcoming and continually engage with the members of the public.”

The council also unanimously passed an amendment to the contract the city has with Block by Block, which codified the budget for the organization. Additions were also made to the motion, including a 45-day check to ensure hiring and training new ambassadors is on track, a crime statistics report provided by Block by Block to measure response times and metrics and the creation of new promotional and communication means to reach residents. The council asked, too, that NARCAN, which helps in combating potential narcotic overdoses, and drink spiking test strips be provided to ambassadors.

Mayor Lauren Meister said that she wanted to make sure Block by Block had everything it needed to be a successful program.

“Because a successful program means a safer city,” Meister said.

As for Gibson, he said he would continue doing his best for the city.

“I just want to continue trying to do the best job I can here, and continue to try and raise the bar for the citizens of West Hollywood,” Gibson said.

‘Twist and shout’ national night out