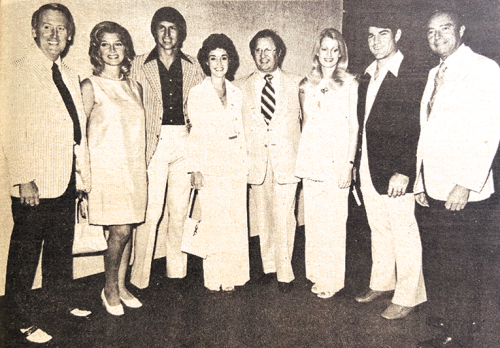 Representatives of the Los Angeles Dodgers including legendary broadcaster Vin Scully, left, were shown in this photograph in the Aug. 22, 1974, issue of the Park Labrea News at a luncheon in the team’s honor held at the Los Angeles Furniture Mart.

Longtime Park La Brea resident Eddy S. Feldman, fifth from left, managing director for the furniture mart, organized the event. Scully is shown with his wife Sandra, Dodgers pitcher Don Sutton and wife Patty, Cyndy Garvey and her husband, Dodgers first baseman Steve Garvey, and Henry Brandler, president of the furniture mart. Honors and tributes continue for Scully, who died on Aug. 2 at the age of 94.

The Los Angeles Dodgers honored Scully with a video tribute before the team’s home game on Aug. 5 and flowers, photographs and mementos have been placed near the entrance to Dodger Stadium at 1000 Vin Scully Avenue.