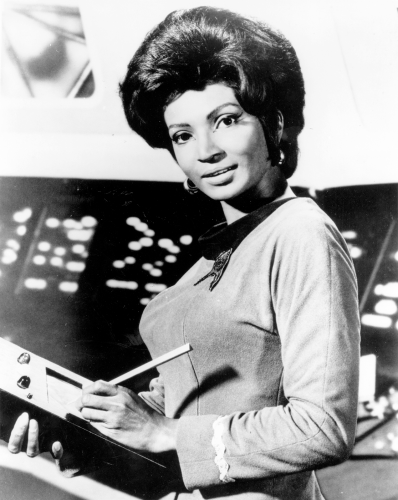 An image of Nichelle Nichols as Lt. Uhura was used in a photograph by NASA Recruiter in 1977. (photo courtesy of NASA)

A legend is gone. Nichelle Nichols, the original actor behind “Star Trek’s” Lt. Nyota Uhura, died of heart failure on July 30 in New Mexico at age 89. While her time as lead communications officer on the Starship Enterprise’s bridge seemed to end more than three decades ago following the sixth film featuring Uhura, her legacy ascends mortal limits.

Nichols’ importance to TV history is well known. Over a decade ago, she clearly told NPR just how much her role on “Star Trek,” which ran from 1966 to 1969, meant to Black viewers like Martin Luther King Jr., especially when the two met and she mentioned her plan to leave the show after the first season.

“‘You cannot do that,’” Nichols recalled of what King said to her. “And I was stunned. He said, ‘Don’t you understand what this woman has achieved? For the first time, we are being seen the world over as we should be seen.’ He says, ‘Do you understand that this is the only show that my wife Coretta and I will allow our little children to stay up and watch?’ I was speechless.”

She served in Starfleet, the exploratory wing of the United Federation of Planets, for three seasons in the original series, another two in the first “Star Trek” animated series, six feature films and a host of ancillary “Trek” content.

She parlayed this immense role into a host of others, including vocal appearances as herself in “Futurama” and “The Simpsons” and fandom winks in adjacent genre series like “Batman: The Animated Series” and “Heroes.” (She even appeared on “The Young and the Restless,” which earned her a Daytime Emmy nom in 2017.)

Off the bridge, she volunteered at NASA “appearing in a promotional film aimed at recruiting women and people of color to apply to be astronauts,” NASA editor Brian Dunbar wrote following her death, which lead to the first Black man and woman reaching space. She maintained a promotional role with the agency for nearly 50 years.

The Los Angeles Times rightly notes her limited role on the original series, far below “dudes” like Kirk (William Shatner), Spock (Leonard Nimoy) and McCoy (DeForest Kelley). But her importance to the series, to the Enterprise, is built into her role as communications officer – everything goes through her.

In The Times’ Robert Lloyd’s words, “She builds exposition, asks important questions; wordlessly reacting to some bit of business on the viewing screen, she brings an emotion and energy into the scene different from that of her sometimes blustery male colleagues.”

And then there’s a complicated moment for pop culture history: the notable kiss between Kirk and Uhura, albeit coerced by the pesky Platonians’ telekinesis in season three, oft dubbed the first interracial, black and white kiss in U.S. broadcast history. One year after Loving v. Virginia determined interracial marriage bans violated the 14th Amendment, NBC aired the small screen’s most prominent space captain locking lips with a fellow bridge officer.

The feedback was generally positive, but Nichols herself recalled network resistance. What if the Deep South cried foul? Dragging their feet, higher ups requested two versions of the scene, one with the kiss and one without. As she notes in her autobiography “Beyond Uhura,” some acting sabotage ensured the only usable options for the final cut would be the pair’s embrace.

Under director-writer J.J. Abrams, Uhura received a touch more screen time but hardly to the degree of Kirk, Spock or Bones across a trilogy set in a different timeline. But when Zoe Saldana took on the historic role in 2009, she did so motivated by a particular affinity for science fiction stories.

“I like being in space because there are better parts for women in space,” she told Badass Digest in 2014. “I don’t have to subject myself to just being the love interest or playing a character that doesn’t feel relevant to the story or playing a woman that doesn’t feel like an actual depiction of a real woman.”

Mind you, the “Star Trek” universe hasn’t always been kind to Uhura. In “Star Trek V: The Final Frontier,” she both enjoys moments of veteran authority and, moments later, distracts foes by erotically dancing atop a dune, a scene best described as cringe inducing.

And while Saldana notes how sci-fi need not present subservient female characters, her Uhura dates Spock, flirts with Kirk and undresses, all in a single film. Alone that might not seem like much, but her male counterparts need not endure such things to remain relevant to the story.

But the latest Uhura on “Star Trek: Strange New Worlds,” which concluded its first season July 7, presents the most promise for fully exploring Uhura. Across 10 episodes, Celia Rose Gooding portrays the once and future Lt. Uhura as a young cadet, versed in multiple languages but conflicted about her future in Starfleet.

Gooding has the best chance to rival Nichols’ screen time as the character, depending on how long the series runs. As of now, she’s already a more prominent figure, filling in many gaps left decades prior. And Gooding herself understands the weight of this role, exemplified well in a special piece she penned on Nichols’ legacy Tuesday for The Hollywood Reporter.

“In pre-civil rights 1960s America, she was simply ‘the woman who answered the phone’ on the USS Enterprise,” she wrote. “But to those with the 20/20 vision of hindsight, she was the woman poised to become the author of a new chapter in the history of Black women in entertainment.”

Like her fictional colleagues, Nichelle Nichols boldly went where no one had gone before. What’s more, her charisma and desire for change invited others to follow her into the future. The journey has been rocky at times, but Nichols and Uhura endure, their joint legacy bravely unfolding in her honor.

Summer is the perfect time for pie