‘Twist and shout’ national night out 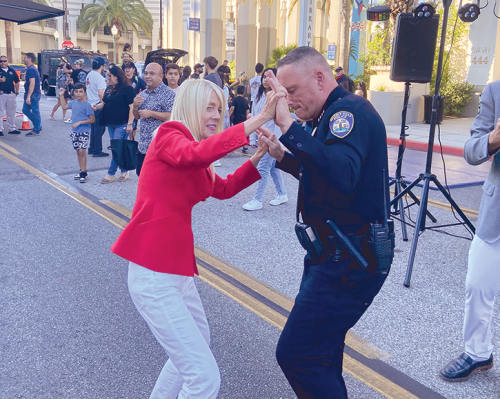 Hundreds of residents in Beverly Hills, West Hollywood and Los Angeles came together on Aug. 2 during National Night Out Against Crime, an annual event in which people show unity with law enforcement and support public safety.

“It’s the first one since COVID, and it’s so important to just get the community out and show the support to the police, and also show criminals we are united and we’re not going to stand for crime in our communities,” BHPD Chief Mark Stainbrook said.

“I think there is no community anywhere in the United States or the world that appreciates and loves their police department and first responders as much as Beverly Hills,” Mayor Lili Bosse added. “Every single day, we embrace them and are grateful to live in our community and have them as part of our Beverly Hills family.”

Many residents said they attended the city’s National Night Out observance every year and were happy it returned after cancellations during the pandemic.

“I love the Beverly Hills spirit, it’s a spirit of cooperation,” resident Robert King said. “I’ve been coming to this for 15 years because it really gives you a sense of community.”

A few miles east in West Hollywood, sheriff’s deputies, Block by Block ambassadors and city staff came together with residents at seven block parties, barbecues and potlucks throughout the city.

“We are here with the community conducting outreach. We’re out for public safety,” said deputy Dominque Salgado, with the West Hollywood Sheriff’s Station. “We are going around to all the celebrations to let people know we are here for them and we support partnerships with them.”

“We’re thankful the sheriff’s deputies are here and we want them to know we support them,” resident Michael Miller added.

“It’s especially important right now because people are more concerned about safety than ever,” Feuer said. “And it’s especially important to see communities come together with the police department. When I see the neighborhood respond so favorably to the LAPD, it’s very heartening because it reminds us that there is a level of trust that exists in every neighborhood of our city. I’m gratified to see the partnerships that have evolved over the years between neighborhoods and the LAPD.”

“I’ve been coming to this National Night Out for the 13 years that I’ve been on the council,” Koretz added. “Particularly, Melrose Action is an amazing group. I’ve been to meetings they’ve held with 600 people showing up, which is unheard of for a neighborhood watch. They have had tremendous community participation for years. They do a lot to make this community safe and they have a great partnership with the LAPD. That may not be true in other parts of the city, but I think the LAPD is well liked and well respected here.”

“This is great. This is where people have questions, they want to get involved in their community, they want to get to know their officers … this is the place to do it,” O’Farrell said. “It’s a celebration, collaboration and community building event.”

Capt. Sonia Monico, commanding officer of the Wilshire Division, added that the officers value interactions with the community and want to be sources of help.

“It’s an opportunity for the community and police to get together and engage in conversation,” Monico said. “They come out for a while, walk around and engage. We also have information about safety, we talk about our recruitment program. It’s especially important because of the pandemic, there were so many [online] meetings, so now we are out here in the public and are happy to be meeting with people.”

“I think it’s important,” added Capt. Jerry Chaney, who oversees patrol operations for the Wilshire Division. “It’s a great opportunity for the police and the community to continue their partnership, to walk around and meet people so they get an opportunity to meet us and see us from a different perspective.”

“Part of a safe community is being able to walk through the community, walk down the sidewalk and walk through the park without the threat of crime and violence,” Yaroslavsky said. “This whole concept started years ago by having people come out of their homes and reclaim the streets in their community, and it’s something that continues today.”

Adrien Powell, who moved to Los Angeles 10 years ago from Louisiana and has resided in the Fairfax District for three months, said he was excited to participate in National Night Out Against Crime for the first time.

“I always walk in the neighborhood and come up to the park, and I just walked up today and saw this,” Powell said. “I love it. There have been a lot of things going on in this neighborhood with robberies and things, but they are cleaning up this area. I’m glad to see everyone coming together out here and having a good time.”