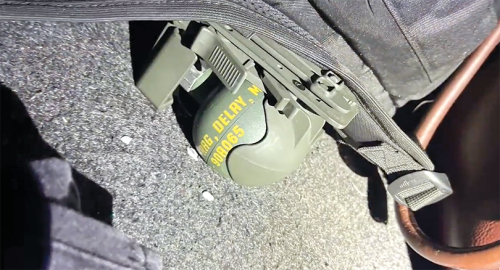 West Hollywood sheriff’s deputies found a grenade in the trunk of a vehicle that was pulled over for having an expired registration tag. (photo courtesy of the LASD)

A male suspect from Hesperia was taken into custody in West Hollywood on Aug. 12 after deputies found a large amount of drugs and a hand grenade in his vehicle during a traffic stop near Fountain Avenue and Detroit Street.

Sgt. Joana Warren of the West Hollywood Sheriff’s Station said two deputies were patrolling shortly before midnight on Aug. 12 and pulled over an older model Pontiac Grand Prix on Fountain Avenue for having an expired registration tag. When they approached the driver, he appeared to be nervous, so the deputies searched the vehicle, she said.

Inside the trunk, deputies found a bag containing a brick-like package wrapped in plastic and aluminum foil, as well as multiple plastic baggies commonly used in the sale of controlled substances, Warren said. They took the driver into custody after determining the package likely contained cocaine, she added.

During a further search of the trunk, deputies found what looked to be an explosive device.

“He also had a grenade,” Warren said. “The Arson and Explosive Detail was called and x-rayed the device. They determined there was an explosive powder in there.”

Warren said residents within a one-block area were ordered to shelter in place for approximately one hour as authorities made sure the grenade would not explode and was safe to transport. The grenade was taken to another location and rendered safe. Warren said detectives with the Arson and Explosive Detail are conducting a follow up investigation regarding the grenade, and the department’s Narcotics Bureau is investigating the alleged drugs, which were sent to a laboratory to be weighed and analyzed. 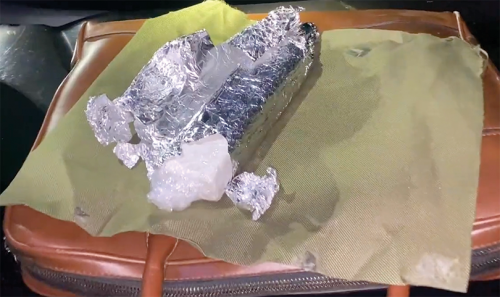 Authorities confiscated a brick-like package of what is believed to be cocaine during the traffic stop. (photo courtesy of the LASD)

Warren said the suspect was booked for possession of a controlled substance with the intent to sell and possession of an explosive device, and is being held in custody. She did not identify the man, but said he is white and in his 30s. Warren added that the suspect declined to provide much information to authorities.

“We tried to ask him what he was doing. We obviously wanted to be very cautious,” Warren said. “He said his friend had borrowed his car but he did not want to talk. He was from very, very far away. We are trying to determine what this guy was doing in West Hollywood with a bag full of cocaine and a grenade. It was very unusual.”

Warren said the two deputies who arrested the suspect are members of a special summer crime patrol that operates from July through the end of September. The deputies patrol the city from 4 p.m.-4 a.m., Wednesday through Saturday, to proactively address crime, she added.

“They don’t answer calls, all they do is focus on trending crime,” Warren added. “In West Hollywood, we have a lot of vehicle burglaries and vehicle thefts, grand thefts of cell phones and robberies, and they are focusing on those. They are part of a proactive effort to suppress crime in West Hollywood.”