‘The Resort’ conjures magic without a single spell 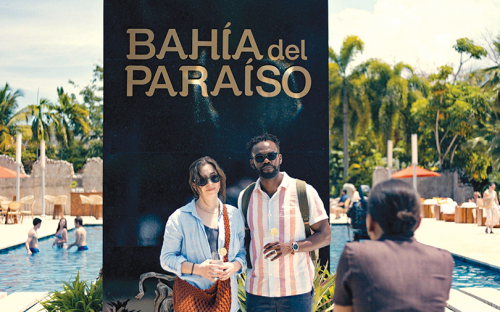 Emma (Cristin Milioti) and Noah (William Jackson Harper) have great chemistry in the comedy-drama “The Resort.” (photo courtesy of Peacock)

A whodunit, true crime, comedy, minimalist fantasy – enjoy an unlikely blend in “The Resort,” a new series on Peacock. It starts slow but soon erupts into a complicated but easy viewing experience worth watching with each new entry.

The premise begins like many before it. Noah (William Jackson Harper) and Emma (Cristin Milioti) celebrate 10 years of matrimony on a Yucatán getaway. The resort package seems incredible, but this is a trip out of obligation more than elation. Noah seems content with the current situation – banter here, nodding off early there, resonance never – but Emma wears her marital dissatisfaction a bit more on the surface. Still, she tries to give festivities a go, even driving an ATV while hungover.

Good thing too, otherwise she wouldn’t have crashed, stumbling upon a flip phone from the 2000s. Oddly obsessed, she finds a way to unlock its contents and discovers the former owner, Sam Lawford (Skyler Gisondo), notoriously went missing 15 years ago, along with a couple other folks. This is the first big clue in a cold case that would otherwise never be solved since a massive hurricane wiped out any evidence hours before a missing persons investigation was supposed to begin.

Apparently Emma loves herself a good mystery, and soon convinces Noah to go all in. Each text message reveals a new clue, some luring the pair into dangerous encounters clumsily resolved. And as they uncover more, we jump back to a now condemned resort during the Christmas holiday in 2007.

Sam flies with his parents and girlfriend to a tropical getaway, during which his relationship status hits a major snag. Then a skateboard accident prompts a chance encounter with Violet (Nina Bloomgarden), visiting with her father (Nick Offerman). They too embark on a mission of their own: the safe return of that pesky skateboard spirited away by an unknown resort staffer.

After five episodes, “The Resort” seems ready to go the way of 2012’s “Safety Not Guaranteed,” a charming indie comedy with a major sci-fi bang. As of now, Emma and Noah’s investigation has unturned inexplicable events and coincidences but nothing paranormal. That might change in the final three episodes, but the result to this point is a realist fantasy, supernatural, coincidental to the max, without a tinge of actual magic. Other shows have attempted this, like Fox’s short-lived “Touch,” but “The Resort” wraps life’s uncanny interconnections around a central plot that’s rather addicting. Every subplot is set to coalesce. Hopefully the writers stick the landing.

Skyler Gisondo as Sam Lawford is at the center of the mystery in “The Resort.” (photo courtesy of Peacock)

Mind you, streamer Peacock deems this one a “comedy-drama” with all the comedic talent to match – Milioti (“How I Met Your Mother”), Harper (“The Good Place”), Offerman (“Parks and Recreation”), Gisondo (“The Righteous Gemstones”) – but the laughs are few to none. In a series like this, consider “comedy” a euphemism, a signal that what transpires is lighter than regular drama fare. And don’t believe any critic who tries to label this a dark comedy. That’s too fast and loose with that genre category.

The series’ dance between emotional complications and crazy antics works well. Milioti and Harper sport solid chemistry as the fishes out of water playing detective before their flight home. Sure, they’re each a type – Harper’s Noah the cautious elder in a young body, Emma the anxious soul in search of a mission – but that’s merely the origin, not the outcome.

Of the two, however, Milioti’s Emma leads the show. Life defeated her, leaving little more than this mystery in a cellphone to bring her back to reality. Noah’s jitters soften the journey, along with a sea of memorable supporting players, like resort security chief Baltasar Frias (Luis Gerardo Méndez) and resort owner Alex (Ben Sinclair, also a series producer).

Consider Milioti’s character a conceptual continuation of Sarah in Hulu’s “Palm Springs” last year. That should make a lot of sense since Milioti teamed with the film’s screenwriter Alex Siara for another odd adventure. Both film and TV series share much in common: a resort, strange happenings, broken people. The only fault here – if one must be found – is the pilot episode’s meager pace. But what small-screen intro doesn’t suffer from such things. They ain’t all gonna be “Lost.”

“The Resort” is its own kind of madness, quirky with a purpose, enchanting without glamor. Strong performances and an enticing web of secrets make for a thrilling, brisk binge.

Take a culinary trip to the Philippines at Abernethy’s