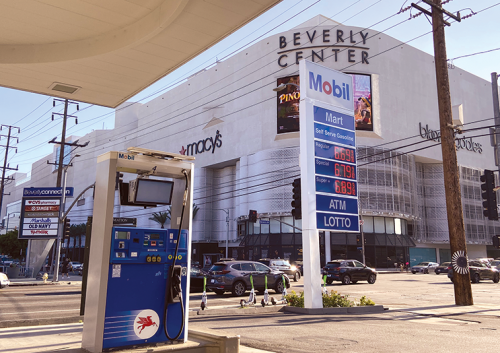 Police believe the victim was shot at a gas station at Beverly and La Cienega boulevards and drove to West Hollywood, where he was found by authorities and pronounced dead. (photo by Edwin Folven)

Police are searching for three male suspects wanted for a homicide after a shooting in a gas station parking lot near the corner of Beverly and La Cienega boulevards on Aug. 19.

Numerous people in the area called police after hearing shots at approximately 5:30 p.m. Officers arrived and determined a shooting occurred, but neither the suspects or victim was still present at the location.

A short time later, members of the public in West Hollywood notified deputies about a black Cadillac SUV with a wounded man inside near San Vicente and Santa Monica boulevards. The victim was taken to a local hospital, where he was pronounced dead. Deputies determined the victim was shot near Beverly and La Cienega boulevards, and the investigation was transferred to the Los Angeles Police Department’s West Bureau Homicide Unit.

Det. Sean Kinchla said police do not know the motive for the shooting. The victim had just finished filling his vehicle with gasoline when a white, four-door sedan drove up and three men got out and started shooting. The suspects’ vehicle was last seen heading east in an alley that runs north of Beverly Boulevard. Detectives only described the suspects as three men wearing dark clothing.

As of Aug. 24, authorities had not released the victim’s name pending notification of next of kin. A spokesperson for the Los Angeles County Department of Medical Examiner-Coroner said the victim was in his 20s.

Anyone with information is urged to contact West Bureau Homicide investigators at (213)382-9470. During weekends and off-hours, call the LAPD’s hotline at (877)LAPD247.