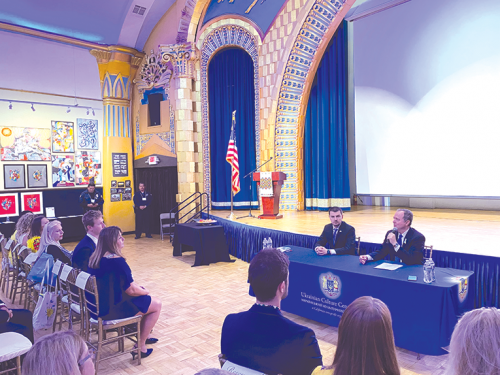 U.S. Rep. Adam Schiff joined members of the California Ukrainian American community on Aug. 21 to mark 31 years of Ukrainian independence and address ongoing efforts to support Ukraine in its war with Russia.

Schiff and Kushneruk addressed organizations supporting the Southern California Ukrainian American community and the war effort, and thanked them for their solidarity.

“Thirty-one years ago [on Aug. 24], following a failed coup attempt by Soviet hardliners, Ukraine declared its sovereignty, ‘considering the will of the Ukrainian people and their eternal desire for independence.’ For decades since, Ukraine Independence Day has been a joyous occasion marked by festivals, parades and celebrations of the tremendous resilience and spirit of the Ukrainian people,” Schiff said. “But there will not be the usual celebrations in Ukraine – because [Aug. 24] also marks exactly six months since [Russian President] Vladimir Putin launched a bloody and unprovoked invasion of their sovereign nation. Right now, the brave men and women of Ukraine are fighting for their lives and liberty to defend all that this date represents: peace, freedom and the promise of democracy. And despite the odds, what they have proven is that their spirit is unbreakable, and their will to fight second-to-none. They have answered the call to defend their homeland and shown the world that the Ukrainian people will not bend to Putin’s belligerence – that no matter how hard he tries, he will never conquer Ukraine’s strong hearts and minds.”