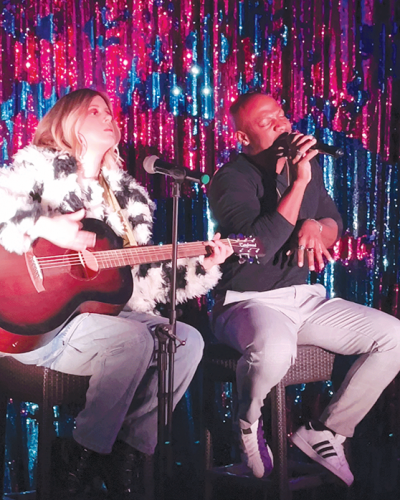 Every Tuesday night at Micky’s in West Hollywood, aspiring artists can share their prose, poetry, voice and humor thanks to a new open mic night spearheaded by the city’s poet laureate Brian Sonia-Wallace.

“My focus is obviously on poetry, but it’s also open to music, both people doing original songs and people doing covers, as well as comedy,” Sonia-Wallace said.

Sonia-Wallace said the attendance has been reliably in the dozens, which he said is pretty good for an “off night activity” in the hub of clubs and bars along Santa Monica Boulevard. A loyal half-dozen or so can be seen most every Tuesday, ready to express their deepest thoughts and feelings.

“The mic for me fills a void of explicitly queer and sex-positive performance venues that are open to artists of any level,” poet Hannah Harris said. “Our nightlife is an essential component to our community’s history and identity, but we often find ourselves void of spaces that can hold both our joy and our soft parts. The mic has created this amazing, accessible hybrid space that’s a happy medium between a [ketamine high] and a queer studies classroom.”

“In a city that is so based on what role you can fit or what art you can sell it’s nice to have an outlet to express my truth,” said Christian Cintron, creator of Stand Up 4 Your Power, which is described on its website as being “an intersectional, spiritual, self-improvement approach to stand-up comedy.”

“It being at Micky’s and such an earnest and welcoming place encourages me to be more vulnerable,” Cintron added.

“I am so grateful for the staff at Micky’s for creating a safe space for us to polish our craft and give way to our artistic queer expression,” Jonz said.

“As a gay stand-up comedian, the mic at Micky’s provides a space that allows me to perform freely,” comedian Sergio Novoa said. “It feels great to tell a joke where the audience gets it without having to fit my material through the heteronormative box.”

Novoa added that the space is filled with people from all walks of life sharing all kinds of art.

“I love the diversity in the room … poetry, music, comedy. It’s great to have these genres all mixed in. I have been moved by some of the poems in a way I did not expect. It’s great to see so much talent flourish freely,” he said.

Sonia-Wallace said the staff at Micky’s played an integral role in getting the night off the ground. The event was supposed to start at a different bar in March 2020. He had worked on its creation with his friend Nate Lovell, who he described as a fellow spoken word artist.

“Literally the week that we were supposed to do that first show, is the week that the lockdowns happened,” Sonia-Wallace said. “Fast-forward to this year and Nate was working at Micky’s.”

Lovell talked to Sonia-Wallace about reviving the idea at Micky’s, saying one of the bar’s managers, Tony Velvoski, was on board. He said the bar felt it would be “something good for the community” and was supportive.

“We did our first trial run back in February-March, and then had our full launch in June and have been going weekly since then,” Sonia-Wallace said.

Harris said that the night includes participants who get to show a completely new side of themselves.

“My favorite moments at the mic have been seeing traditional pillars of the West Hollywood community like go-go dancers, bartenders and social workers step into a different and more earnest role in front of the mic,” Harris said. “There is a tremendous sense of trust and vulnerability in the room. Queer people are often just perpetually silent poets and daydreamers putting on grown up costumes. My favorite part of the mic is watching our masks come off and our sensitive, queer inner children come out to play.”

The open mic night will have its first poetry slam competition on Sept. 6.

But any competition aside, it is the environment’s freedom of expression and acceptance that keeps artists like Dom, a live painter who creates a new piece every week, coming back again and again.

“When I sit down at the easel and lift my brush to the canvas, I don’t need to turn around I just wait for the voices of West Hollywood to croon, chirp, demand or celebrate behind me and let them do the brushing for me,” Dom said. “I become a merry little succubus and it is an honor translating that into visual format.”