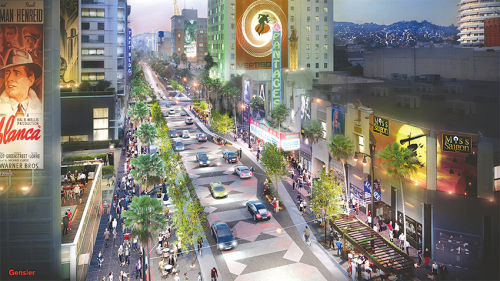 Hollywood Boulevard will undergo a dramatic transformation under the HEART of Hollywood initiative. (rendering courtesy of Councilman Mitch O’Farrell’s Office)

Streetscape improvements will be coming to the Hollywood Walk of Fame next summer through funds from Metro’s Measure M Metro Active Transport program. Los Angeles City Council President Pro Tempore Mitch O’Farrell, 13th District, announced on July 28 that the funds will be used for “quick-build” elements of the project.

“For three years, most of it during an unprecedented global pandemic, we’ve been working to bring transformative improvements to the Hollywood Walk of Fame,” O’Farrell said. “Despite the challenges brought by COVID-19, we have continued to move forward, and I’m proud to share that major upgrades are on the horizon. The city’s partnership with Metro will bring to life beautifully designed improvements, centered around pedestrians and transit riders, to the heart of Hollywood.”

Metro’s Board of Directors voted unanimously in January 2021 to award $7.2 million in MAT funding for improvements on Hollywood Boulevard. The quick-build streetscape project will include the conversion of most of the parking lane on Hollywood Boulevard between Orange Drive and Gower Street into an expanded pedestrian zone. It will also include a cohesively designed system of street furnishings, including tables and chairs for sidewalk dining, bus shelters, bicycle racks, transit kiosks, benches, planters and landscaping, including additional shade trees. New consolidated bus stops with boarding platforms and will be included, as well as more space for activities such as sidewalk vending, temporary art installations, music and cultural performances. The project will increase pedestrian safety and reduce pedestrian crossings along Hollywood Boulevard, O’Farrell said.

“Metro is proud to be a funding partner with the city of Los Angeles on this important active transportation project on Hollywood Boulevard,” Metro Board chair Ara Najarian added. “These new improvements will not only make this iconic corridor more walkable and bikeable, they will also help Metro’s customer experience by improving shade at area bus stops and integrating our Next Gen approach to bus operations. Thank you to our Metro Board, Councilmember O’Farrell and the Metro team who worked so hard on this project. I can’t wait to break ground.”

In January 2021, Metro also funded environmental review for a larger portion of the Hollywood Walk of Fame Master Plan. An initial concept of the larger plan was released in 2020 and envisions wider sidewalks, protected bicycle lanes, additional shade trees and pedestrian safety enhancements along Hollywood Boulevard. As part of O’Farrell’s HEART of Hollywood initiative, the city invested approximately $4 million in June 2019 to kick-start the Walk of Fame Master Plan effort and hire a design team led by Gensler. As part of an ongoing strategy, the city has conducted robust community engagement and has held 65 roundtable discussions, in addition to other public meetings, in-person and virtual open houses and an online survey. Two design phases have been completed, with a third anticipated to begin this fall.

O’Farrell said the city has been proactive in seeking grant funding and additional resources to fund the full construction of the Walk of Fame Master Plan. Through a partnership with the Southern California Association of Governments, the city is currently studying the feasibility of a possible tax increment financing district in the area that could fund infrastructure improvements.

“The Walk of Fame quick-build improvements will be a game changer for Hollywood Boulevard,” said Kathleen Rawson, president and CEO of the Hollywood Partnership. “The placemaking infrastructure will not only enhance the pedestrian experience by providing a more pleasant environment, it will also serve as a motivating factor for reinvestment in the private properties along the street. Now is the time for bold moves in Hollywood, and this project is an example of how our local leaders can make real change in the public realm for the betterment of our community.”