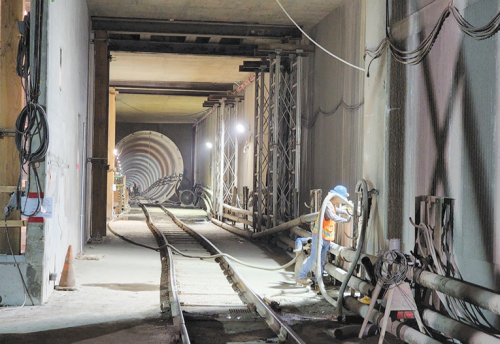 Crews are pumping out water mixed with particulates from around the tunnels and purifying it before replacing it back into the ground. (photo courtesy of Metro)

Crews are continuing construction along Wilshire Boulevard during late August for the Purple Line Extension subway project. Work zones have been set up from Wilshire/Western to the Westwood/VA Hospital station, and work is progressing above and below ground.

At the eastern end of the project in the Windsor Square and Hancock Park areas, crews are working in the street at multiple locations. A K-rail work zone will be in place through the end of 2022 on Wilshire Boulevard at Rimpau Boulevard. Two lanes are open in each direction between Muirfield Road and June Street. Wilshire Boulevard will also be reduced to two lanes in each direction between Crenshaw Boulevard and Muirfield Road around a K-rail work zone in the middle of the street.

Crews are restoring curbs and gutters through early November near Wilshire/La Brea. A work zone has been established along the north side of Wilshire Boulevard, which will be reduced to two lanes in each direction between Mansfield and La Brea avenues. Left turns from Wilshire Boulevard to Orange Drive and Sycamore Avenue will be restricted.

Work is also occurring within construction staging yards at Wilshire/La Brea. Construction of the station entrance in the North La Brea staging yard will continue through at least September.

Work also continues on the future subway stations at Wilshire/Fairfax and Wilshire/La Cienega. Crews are working in construction staging yards and underground on adjacent rooms and passageways. At Wilshire/Fairfax, plans call for 10 weekends of closures on Wilshire Boulevard from Sept. 9-Dec. 19 for street restoration.

Work also continues in Beverly Hills on the Wilshire/Rodeo station. Ground improvement work to prepare for the construction of cross passage tunnels is ongoing. At least one lane in each direction on Wilshire Boulevard will be closed around the backfilling work, which is occurring at different locations along the tunnel alignment. Lanes on Wilshire Boulevard may be intermittently reduced between El Camino and Crescent drives.

Crews are also excavating the future Century City subway station through the first quarter of 2023 and conducting utility relocation work. Partial traffic lane closures are currently in place on Constellation Boulevard to facilitate station excavation, hauling and material delivery. Avenue of the Stars will be reduced to one lane northbound and southbound at Constellation Boulevard.

BHPD says drive sober or get pulled over