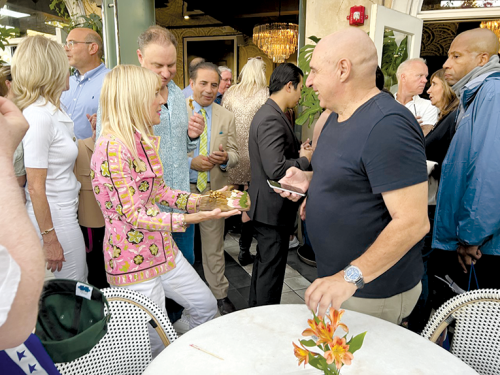 Mayor Lili Bosse passed trays of hors d’oeuvres during the Aug. 8 “Business with Bosse” at Nua. (photo courtesy of the city of Beverly Hills)

Beverly Hills Mayor Lili Bosse made showcasing local businesses a priority during her third mayoral term, and it appears to be paying dividends for the establishments that participate, especially as the city recovers from the pandemic.

On Aug. 8, Bosse held another “Business with Bosse” event at Nua, a modern Mediterranean restaurant located in the Crescent Hotel. Like her previous events, it was well-attended.

“It was remarkable,” Bosse said. “It was great, because they had many, many people who had never been to that restaurant, and now they’re going back.”

She said her goal is to introduce the community to its “wonderful” local businesses, while also bringing the community together again after many residents were isolated due to the COVID-19 pandemic.

“There are new friendships that have transpired,” Bosse said. “There’s networking. … The attendance has been extraordinary.”

Beverly Hills Chamber of Commerce president and CEO Todd Johnson has attended every “Business with Bosse” since her inauguration in April, when she announced the initiative. He said the events have been “spectacular” for businesses in Beverly Hills.

He said the events have benefitted chamber members and non-chamber members alike, and it has led to some business owners and operators inquiring about joining the chamber. It also helps businesses like Nua, which are off the beaten path, so to speak, Johnson said.

“I think all of them have been full of energy,” he added. “Lili is full of energy. But, lots of photos. Lots of social media. Lots of great food. It gives exposure to the businesses, restaurants and some retailers. I think she’s doing a wonderful job, and we’re glad to partner with her.”

“It’s great for her to do things in the community,” Han said. “It was a pleasure to have everyone here and great to have our local guests come visit and see the restaurant.”

During her previous terms as mayor, Bosse organized “Walk with the Mayor,” which had a similar concept. Every Monday morning, participants would meet at City Hall and walk to a local business.

However, the events were somewhat restrictive, as they were always held in the morning. “Business with Bosse” events, though, are held on different days and at different times, enabling more individuals to attend, the mayor said.

“It really, I think, broadens the ability for people to enjoy it and come [when it fits] their schedule,” Bosse added. “It’s an hour-and-a-half, so people can stay the whole time or they can pop in. The funny thing I’ve noticed with ‘Business with Bosse’ is that, even though it’s at a set time … people want to stay longer, which tells me that they’re having a great time and they’re loving the business.”

She said she has sought to promote local businesses even before she became an elected official, as it helps build community in the city.

“You really get to meet your neighbors and meet new faces,” Bosse said. “Whether it’s the mom and pop small business or a larger business, you really get to know the people that are there, and it’s just another form of feeling that our city is an extended family. This is something that has been a passion of mine, bringing community and businesses together.”

Although many “Business with Bosse” events have been held at restaurants or coffee shops thus far, the mayor hopes to expand the initiative’s reach in the future. She said businesses have reached out about participating and scheduling future events is ongoing.

“We’re open to absolutely supporting all types of businesses in our city,” Bosse added.