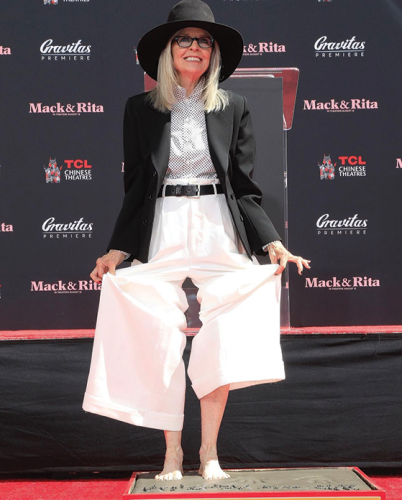 “As a girl growing up in Orange County, the mere thought of Hollywood Boulevard seemed honestly like a mysterious dream that would never, ever come true, and one summer day mom and dad piled us kids into the car with a nice, surprise treat that turned out to be … an actual, empty parking space near Grauman’s Chinese Theatre,” Keaton said. “I wanted so, so, so much to be part of the wonderful world called Hollywood.”

Keaton started her acting career in New York, appearing in the original Broadway production of “Hair” in 1968. She rose to fame with the crucial role of Kay in “The Godfather” (1972) and “The Godfather, Part II” (1974). Keaton became known for her work with writer, director and actor Woody Allen, with starring roles in “Play It Again, Sam” (1972), “Manhattan” (1979) and “Annie Hall” (1977), for which she won an Academy Award and set the trend for her trademark androgynous fashion sense.

Keaton is also known for her work as a board member of the Los Angeles Conservancy, which works to preserve the area’s history. Her advocacy has been key in preserving homes like the Ennis House, and she was also active in the failed campaigns to save the Ambassador Hotel and, most recently, a home located 1001 N. Roxbury Drive in Beverly Hills.

“To be here [at the Chinese Theatre] is also a reminder, it’s a real reminder, to take care of our treasured monuments,” Keaton said.

‘The Prom’ is shmaltzy, earnest and hilarious

CicLAvia returns to WeHo and Hollywood on Aug. 21