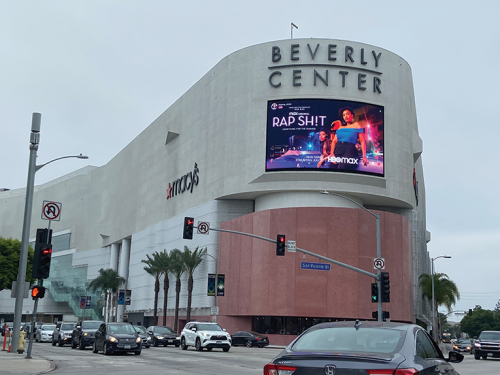 A mural by Ginoflo will premiere on Aug. 7 at the Beverly Center.
(photo by Edwin Folven)

In honor of International Peace Month, Beverly Center and Los Angeles-based nonprofit organiza­tion and grassroots effort, Paint the City Peaceful have partnered once again on a community-driven art project that seeks to connect Angelenos in the hopes of creating a better future. On Sunday, Aug. 7, L.A.-based artist Gino Burman-Loffredo, or Ginoflo, will create a mural in Beverly Center’s Grand Court titled “Peaceful Is Not Passive” to celebrate International Peace Month and benefit the non-profit Safe Place for Youth.

Nineteen years ago, Ginoflo started using painting and drawing as an outlet for his hidden creativi­ty. His art is truly an expression of who he is internally as well as the love and peace he brings to the world. Ginoflo recently had his first child, and it deeply impacted his motivation to create art. He wanted to teach his daughter the gift of giving back so he researched an organization she could support. Ginoflo was notified about Safe Place for Youth, which had a pro­gram for pregnant and parenting families. After seeing the organiza­tion’s impact on young people, it ended up being the first place his daughter was able to start her jour­ney on giving back, and a place he could donate paintings to in the future.

Ginoflo’s work has gained fame through his recent collaborations and high-profile collectors. His art has been seen at numerous charity events, in the hit HBO show “Entourage,” on a 10 foot guitar on Sunset Boulevard for Gibson’s Guitar town, in the the New York Times, NFT collabora­tions and on three-story buildings throughout L.A. He also has murals in Elon Musk’s Hyperloop headquarters, The Miz’s mansion in West Hills and recently sold out his collaboration with Blackmilk Leggings.

The mural will be stationed in Grand Court (Level 6) for the month of August. The Beverly Center is located 8500 Beverly Blvd.