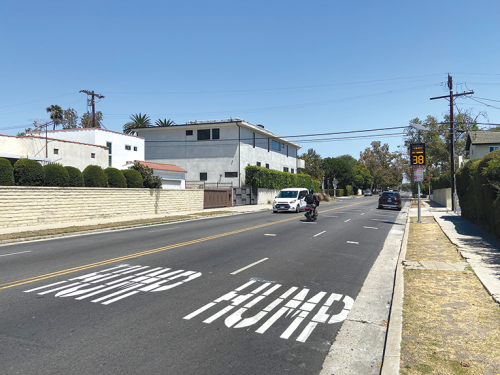 Motorists on Sixth Street frequently travel faster than the 35 mph speed limit, according to the LAPD. (photo by Edwin Folven)

The Los Angeles Department of Transportation is installing speed tables on Sixth Street between La Brea and Highland avenues to slow drivers as they pass through the residential neighborhood.

Two speed tables will be located on Sixth Street near the intersections of Sycamore and Citrus avenues. Speed tables are midblock traffic calming devices that raise the entire wheelbase of a vehicle to reduce traffic speeds, according to LADOT. At approximately 3 to 3.5 inches tall and 22 feet in length, speed tables are much longer than speed humps and are flat on top. They are used on streets with speed limits ranging from 25 to 45 mph. The speed limit on Sixth Street is 35 mph.

The installation is expected to be completed by Aug. 11. Signage on the street and next to the road alerts motorists to the speed tables. The project was funded by $40,000 approved in March in a motion by Los Angeles City Councilman Paul Koretz, 5th District, but the idea for the project dates back more than two years to when Councilman David Ryu represented the area. Redistricting occurred in 2021, and the neighborhood was transferred from the 4th District to the 5th District represented by Koretz. The councilman stressed that Ryu deserved credit for the project, and he was happy to see it through to implementation.

“We hope it will be something that results in a significant reduction in speeding in the area and that it keeps making the neighborhood safer,” Koretz said.

“We get a lot of calls with complaints about Sixth Street. A lot of residents are concerned. We do have accidents and speeding in the area,” said Sgt. Dan Eun, with the Los Angeles Police Department’s West Traffic Division. “We conduct enforcement in the area. We have a lot of overtime grants for enforcement that comes from the state, and we have been deploying extra officers two to three days a week … but ultimately, we can’t be everywhere all the time.”

Cathy Roberts, president of the La Brea Hancock Homeowners Association, said collisions and speeding are a continual problem along Sixth Street, and her group worked with Ryu, and later Koretz, to get the speed tables installed.

“The speed tables are an attempt to slow people down,” Roberts said. “There have been some bad accidents on that street. People hit the gas and go way too fast.”

A speed indicator sign has been in place for the past two years on Sixth Street east of La Brea Avenue as part of an earlier effort to slow traffic, Roberts confirmed. Others in the neighborhood also said the speed tables are a welcome addition.

“Hopefully it works, because you take your life in your hands trying to cross the street around here,” Sycamore Avenue resident Tyler Morris said. “Anything that can be done to stop people from driving so fast through here is great.”

“It’s terrific. We are thrilled. We have been asking for this for a long time,” added Cindy Chvatal-Keane, president of the Hancock Park Homeowners Association. “It becomes like a freeway between La Brea and Highland.”

Eun said police officers will continue patrolling the area and issuing citations to reduce speeding, and the speed tables will be an added element to address the problem. He stressed, however, that it is the responsibility of every motorist to drive safely.

“We get a lot of speeding, not just in the Wilshire area, but all over the city,” said Eun, who heads the West Traffic Division’s Community Traffic Services Unit. “We will continue to enforce the laws, but until people take it upon themselves to drive safely, I’m not sure what the answer is.”