CicLAvia returns to WeHo and Hollywood on Aug. 21 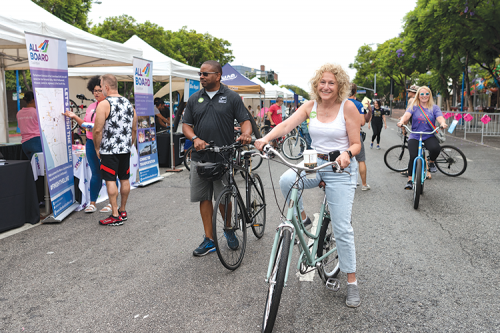 From the Hollywood Walk of Fame to West Hollywood’s inclusive pride crosswalks, everyone is invited to come along for the ride and walk, bike, roll and stroll through along the area’s most iconic streets. The event will close Santa Monica Boulevard from N. La Brea Avenue to N. San Vicente Boulevard to vehicle traffic and thousands of cyclists will fill the streets. The event will take place between 10 a.m. and 4 p.m.

The city of West Hollywood is inviting CicLAvia participants to make a day of it in West Hollywood and attend the city’s free Summer Sounds Concert Series finale at 5 p.m. at Plummer Park, located at 7377 Santa Monica Blvd., featuring M&M The Afro-Persian Experience. The Afro-Persian Experience is a duo featuring Persian kamancheh master Mehdi Bagheri and artist/percussionist Marcus L. Miller. The music consists of all original compositions created by Bagheri and Miller and is deeply rooted in the traditions of ancient Persia and Africa. Their unique sound results from the natural contrast of their individual musical styles as well as the expression of their passion for the music. This concert is presented in partnership with Grand Performances, supported by an arts grant from the city of West Hollywood.

For those who wish to attend without attending CicLAvia, Summer Sounds concert parking will be available in the Plummer Park north lot off Fountain Avenue at N. Vista Street; CicLAvia will provide north-south vehicle crossings for through traffic at N. La Brea Avenue and N. Fairfax Avenue.

CicLAvia is a nonprofit organization that catalyzes vibrant public spaces, active transportation and good health through car-free streets. CicLAvia engages with people to transform our relationship with our communities and with each other. Inspired by Bogotá’s weekly ciclovía, CicLAvia temporarily closes streets to car traffic and opens them to Angelenos to use as a public park. Free for all, CicLAvia connects communities to each other across an expansive city, creating a safe place to bike, walk, skate, roll and dance through Los Angeles County. 1.6 million people have experienced CicLAvia, and it is the biggest open streets event in the United States.

BHPD searches for gunman in shooting on Canon Drive