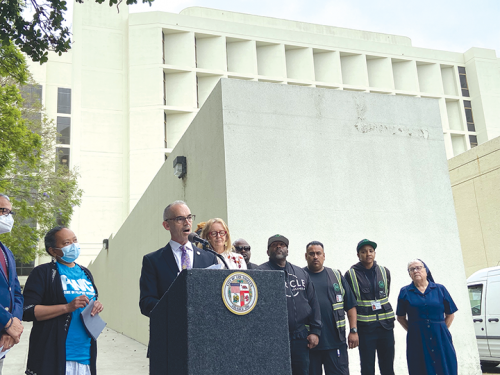 The former St. Vincent Medical Center, located at Third and Alvarado streets, is currently vacant. Soon-Shiong, who also owns the Los Angeles Times, has not responded to requests to meet about the potential future of the site, O’Farrell said.

“Angelenos want St. Vincent to reopen immediately as an acute facility for people experiencing homeless,” O’Farrell added. “There’s no more time to waste. Dr. Patrick Soon-Shiong could help us rebuild the lives of hundreds of Angelenos at a time, if only he would come to the table.”

St. Vincent Medical Center, which was bought by Soon-Shiong in April 2020, has been mostly closed for the past two years, except for a period in 2020 when it was reopened by the state to treat COVID-19 patients, prior to Soon-Shiong owning the property. In June, O’Farrell was joined by civic leaders and public health advocates at a press conference calling on Soon-Shiong to work with the city on reopening the facility.

Soon-Shiong stated in a Los Angeles Times article published shortly afterward that he is open to discussing possibilities with the City Council but has not yet responded to subsequent requests to organize a meeting, O’Farrell said. Last month, O’Farrell also introduced a resolution calling on the state of California to assist city’s efforts to reopen the facility. For information, visit cd13.lacity.org.