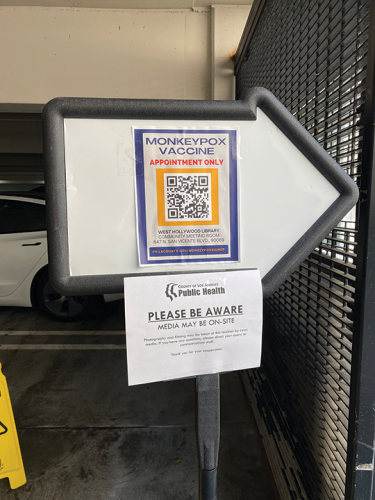 The vaccination site at the West Hollywood Library opened on Aug. 3. (photo by Rance Collins)

Nonprofits in the Los Angeles area have been sounding the alarm about the monkeypox outbreak, taking out advertisements and writing op-eds for local and national publications and websites lambasting the local, state and federal government’s response to the virus.

“In this situation, we have a vaccine, we have treatments, we understand this virus compared to other viruses more than any previous infections that we’ve been dealing with recently … and yet [the government] response was just as bad as it was to COVID-19,” AHF director of advocacy and policy research Adam Sukhija-Cohen said.

Sukhija-Cohen said the response to the virus should have been swifter, since the resources were already available to combat it.

“We had an advantage, and we didn’t take it. Something has to change in our current public health infrastructure. COVID already revealed enough about where the flaws are, but I think that monkeypox is re-instigating the problems we had with AIDS. And I think now we’re dealing with the repercussions,” Sukhija-Cohen said.

The Los Angeles LGBT Center also issued statements calling on a greater response from local, state and federal governments. The center’s CEO Joe Hollendoner said time is of the essence, since the outbreak could soon turn into an epidemic.

“Unless the federal government … revises their playbook, then we will not only see monkeypox become an epidemic here in the United States, but that we will continue to experience health crisis after health crisis because of their inability to contain viruses,” Hollendoner said. “I think what’s particularly unfortunate is that LGBTQ+ people, and particularly those who are Black and Latinx, continue to be the canaries in the coal mine of the public health response. And I would like to see the federal government, and in turn the state and local health systems, do a better job of protecting and promoting the health of queer individuals.”

Hollendoner said that there should be a reframing in the messaging surrounding the viruses, particularly now that cases are beginning to pop up in people outside of the LGBTQ+ community.

“What is so troubling is that, unlike COVID, there is a vaccine for [human monkeypox], and there is a treatment, while experimental, that has seemingly proven effective. And despite having those tools and resources at our disposal, the federal government has not deployed them in ways that will actually help the LGBTQ+ community. And so I can’t help but feel that homophobia and transphobia is playing a role in their lack of urgency, and that’s deeply concerning to me,” he said.

Hollendoner added he was also concerned by how some patients with the virus have been treated.

“I was shocked to hear at the town hall that occurred in West Hollywood [on July 27] that an individual that had been diagnosed with monkeypox was essentially being put under house arrest until their symptoms subsided, and to me what that indicated was the level of stigma that is in existence around monkeypox within our public health and government systems, but also that it was an uninformed response,” he said.

Hollendoner said that since the virus is primarily transmitted through prolonged contact with someone who is infected, the center has been advocating for a more science-based approach to the response.

“This continued practice of putting people in home isolation while they are showing symptoms just isn’t really following the science, and individuals who have been failed by the public health system shouldn’t be further alienated or isolated in the response and instead the local, state and federal government should do what is necessary to stop this virus from spreading,” Hollendoner said.

Sukhija-Cohen said that it took too long for the county to speak to the public about the virus, citing that he believed the July 27 West Hollywood town hall was the first time a Los Angeles County Department of Public Health official had addressed monkeypox publicly. He said he would like to see more public addresses.

“I think that is how you put public back into public health,” he said, adding that AHF is advocating for the county to have regular, twice-weekly briefings on the state of the virus.

While a limited supply of vaccine remains, the Joe Biden administration announced on Aug. 9 that it is authorizing a five-fold increase in supply of the JYNNEOS vaccine, the preferred vaccination for monkeypox prevention. Additionally, an intradermal administration will be rolled out, which requires a smaller amount of vaccine to be used, which the White House said will increase the number of people who can be vaccinated.

The announcement comes as additional vaccination clinics continue to open in Los Angeles County. On Aug. 3, the West Hollywood Library was added as a site, and on Aug. 8, Los Angeles County Supervisor, 1st District, Hilda Solis announced a location at Barnsdall Art Park in East Hollywood.

“As the monkeypox outbreak continues, it is critical that we increase accessibility to the vaccine for at-risk communities,” Solis said. “With the launch of the monkeypox vaccination site at Barnsdall Park, L.A. County is making it easier for residents in hard-hit communities to get vaccinated. I encourage residents to assess their risk and take steps to protect themselves from monkeypox as we wait for additional doses to [arrive in] Los Angeles County.”

According to Solis’ office, there were 616 confirmed or presumed cases in the county on Aug. 8, with the vast majority affecting the LGBTQ+ community.

“As a gay man who came of age and lost friends during the height of the AIDS crisis, we cannot let history repeat itself,” Los Angeles City Councilman President Pro Tempore Mitch O’Farrell, 13th District, said. “I’m thankful that the 13th District and the historic Barnsdall Art Park is now home to a monkeypox vaccination site, which coincides with the city’s own emergency declaration. We need to unlock every resource to combat a disease which, like AIDS, disproportionately impacts the LGBTQ+ community.”