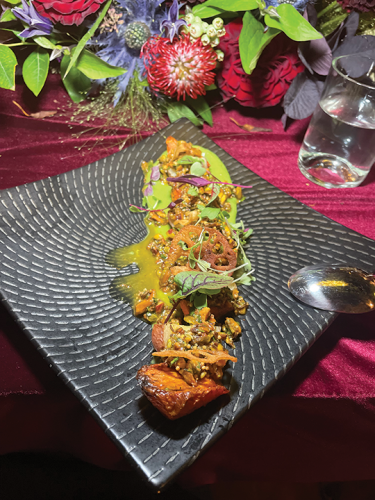 Chef Sarah Stearns expects guests to eat all of their carrots at Avant Garden Bistro. (photo by Jill Weinlein)

I walked into the enchanting brick courtyard of the new DeRossi’s Avant Garden Bistro on Melrose Avenue and immediately noticed a dining patio teeming with flowers, lights and greenery. I felt as if I had stepped onto the set of “A Midsummer Night’s Dream,” due in part to the design by Overthrow Hospitality’s Ravi DeRossi and his friend, the acclaimed set designer Andrew Nowling (“Euphoria,” “Mulan”). DeRossi is a 2022 James Beard nominee and founder of the hip cocktail institution, Death & Co.

Our server added to the magical atmosphere with her style and makeup transforming her into a mythical sprite.

Everything is a pleasant surprise at Avant Garden Bistro, including Mixologist Sother Teague’s low-ABV drinks. We started with one of his vista sours and a Green City drink. The vista sour is made with Carpano Antica, lemon and blood orange juice, a touch of vanilla and crunchy and slightly bitter cacao nibs. The cucumber ribbon strategically placed in the glass of the Green City enticed me to sip the cocktail of dry vermouth, cucumber juice, lime juice, a pinch of saffron and a top of dry white sparkling wine.

When DeRossi approached me, he shared about his early life in Los Angeles.

“I used to live nearby about 30 years ago and was a busboy in the restaurant in this exact space,” he said. He later moved to New York and was called a “New York stealth bar owner and restaurateur” by the New York Times.

DeRossi Avant Garde Bistro opened this summer with high anticipation, with eager vegan diners awaiting to try the cuisine. A tray of crunchy toast topped with smooth English pea spread and pickled hon shimeji was the first dish passed around the patio. The hon shi meji mushrooms are native to East Asia and one of DeRossi’s favorites, he said. They are enhanced with tahini, chopped basil, a sprinkling of white and black sesame seeds and balsamic vinegar.

DeRossi hired chef Sarah Stearns, a Los Angeles native who worked at the Avant Garden New York location, to create some of the menu items. This petite but mighty force to tell her own story with the vegan fare. Her beet toast with cashew ricotta and wasabi peas and a spinach and artichoke toast with black truffle, crunchy jicama and cashew is delicious. My favorite dish was the eggplant toast with delightful, pickled apricots, miso and parsley. Her toast of cremini mushrooms on a walnut puree, cut red grapes and a little bit of calabrian chili for a touch of heat was inspired.

The delicious artisan breads Stearns uses are from CEOR bakery. They bake a bread known as dark fire that is made with beets, black garlic and black sesame, with fresh milled black barley. It’s striking as it is shaped to resemble a Hawaiian red ginger flower.

“It is exciting and humbling to work with Ravi and the team on this new concept. This is the first time I have been given the opportunity to lead a kitchen,” Stearns said. “I’ve always been a sous chef and appreciate the opportunity to be the executive chef.”

“While there are many vegan spots in LA, I think we are creating something really unique, an elegant and special for Angelenos that will become a destination for vegans and non-vegans alike.”

Her shaved Brussels sprouts salad arrived and it was packed with bold sweet flavors from dried currants and crunchy textures from the roasted almonds. A turmeric goddess-style dressing with earthy flavors finished and balanced the salad.

Master sommelier Brett Zimmerman pairs vegan wine with Stearns’ dishes. Zimmerman is an expert and has his own wine shop in Boulder, Colorado. In addition, Ramon Hung has secured some great local and international beers.

Other enlightening dishes on the menu were a plate of crispy sushi rice rectangles that were topped with creamy avocado puree and an appealing carrot ginger dressing. In the middle of the plate were four slender and blistered finger-long shishito peppers with a miso glaze. About one out of every ten to 20 peppers is spicy, and the first one I bit into was very hot.

Another favorite dish was the bite size roasted carrots with a crunchy pistachio chermula made with cilantro, green onion, mint, sherry vinegar and garlic with chopped pistachios and a pinch of salt. I also enjoyed a quarter flower of scorched cauliflower that dazzled with a garlic white wine glaze and was topped with crispy fried capers, chopped calabrian chilis and micro greens.

The final dish was a bed of crib and green bean succotash topped with smoked bok choy and served with a sourdough fritter and purple sprouts. A light soy and citrus butter drizzle enhanced the wonderful flavors.

We finished with a refreshing coconut mocha cake with fresh pineapple chunks, dragonfruit and chopped macadamia nuts sprinkled on top. The berry jamaica and sliced strawberries gave this dessert a pop of red color.

Avant Garden Bistro is a magical sanctuary in one of the prettiest dining patios in Los Angeles. The menu will inspire you to eat all of your vegetables and appreciate the bold flavors in Chef Sarah’s vegan delights. $$-$$$ 7469 Melrose Ave., (323)433-4141.