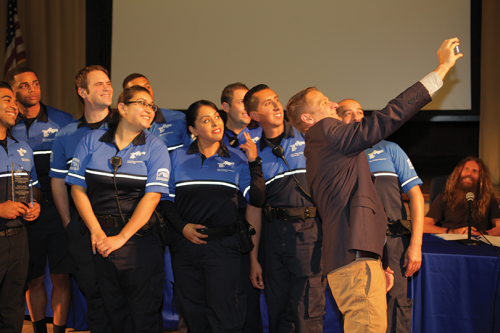 Councilman John D’Amico poses with Block by Block ambassadors at the 2015 Public Safety awards. Block by Block has been a West Hollywood safety program since 2013. (photo by Joshua Barash)

Following reports from other local media websites, officials and residents from the city of West Hollywood have responded to information regarding Block by Block operations manager Shea Gibson, who was convicted of voluntary manslaughter in Georgia in 1995. Block by Block is a safety ambassador organization, which according to its website operates “in over 100 locations.”

The city of West Hollywood issued a statement defending Gibson.

“Regarding background checks, the RFP process by which Block by Block was selected includes specific requirements for adherence to guidelines established by the U.S. Equal Employment Opportunity Commission,” the statement read in part.

Block by Block also issued a statement in support of Gibson.

“Mr. Gibson is an excellent and valued member of the Block by Block team,” the company’s statement read. “Since joining the company as a hospitality ambassador in Santa Monica in 2013, he has received multiple promotions and continues to serve as Block by Block’s operations manager in West Hollywood, which is a position he has held since 2019.”

Block by Block also noted that Gibson’s previous conviction was not applicable to California state law in regards to background checks.

“Block by Block is in compliance with the city of West Hollywood’s procurement and vendor policies in that we conduct employment prescreening, including criminal background checks, on all job applicants after an applicant has been made a conditional offer of employment. In California, employment screening laws state that employers cannot ask about, or take into consideration, criminal convictions older than seven years. Based on the guidance of the U.S. Equal Employment Opportunity Commission, if a background check reveals a criminal conviction, Block by Block considers the nature and gravity of the offense; the time that has passed since the offense, or the employee’s completion of any sentence given as a result of the offense; and the nature of the job held or sought,” the statement read.

The information comes on the heels of a recent decision by the West Hollywood City Council to invest more funds into the Block by Block ambassador program, while simultaneously eliminating four sheriff’s department deputies over the next nine months.

Los Angeles County Sheriff Alex Villanueva declined to comment for this article, with the department pointing to an interview he gave to the Washington Examiner, a website that bills itself as presenting “political news and conservative analysis,” as his only statement on the matter.

“The City Council says they are enhancing public safety because they are replacing four deputies with 30 unarmed ambassadors,” Villanueva said in his interview with the Washington Examiner. “The city knew about his criminal history because they received an email about it. He committed murder and plea bargained to manslaughter and did eight years.”

Villanueva added that the council doesn’t “bother vetting who they replace cops with, so they settled on a convicted murderer.”

Meanwhile, West Hollywood residents have leapt to the defense of Gibson, citing online discourse from local blogs as unfair and vicious.

“I think that people should be open-minded, look at the facts, understand that he does not own this company, Block by Block, he’s an employee,” resident Galtano Frizzl said. “That the company has vetted him and his other employees and the employees have passed background checks. I know this individual did his time, and that he is someone that has paid his debt to society and since working for this company, he has done very well. No issues. Been promoted, and had a great track record in doing his work for the city, managing these people that come under him, he’s done great with that, as well. So, if you have issues with Block by Block, have it as an organization, not about him.”

Resident Shannon Morton also expressed support for Block by Block, noting that there was a racial tinge to the comments against Gibson, calling reporting by some media outlets “fearmongering” and “propagandized.”

“I support the Block by Block initiative,” Morton said. “I would also like to say I’ve been very disheartened by reading some of the [local media] comments. Not only are they racist, but the people who continue to promote this ‘woke’ politization, you also sound racist and you sound entitled.”

“I want to show my support for Shea, our Block by Block captain, an ambassador and just overall ambassador to our community,” Councilman John Erickson said. “The stuff people said about Shea is racist, it is anti-black and it is completely disgusting and has no place in this community. If you want to sit there and talk about restorative justice, this individual has been an upstanding member of this community, and I have never once seen someone with more care and compassion for our residents and businesses and frankly, everything that goes on in the mission of this city.”

“I also stand with Shea Gibson,” Mayor Pro Tempore Sepi Shyne added. “The way the local media has in essence done a witch hunt against Shea Gibson is not the values we as a community hold dear. All of this happening really, truly shows how much work we really need to do in our city to continue to dismantle racism. And it is real and it is really evident.”

“I consider this type of media to be a town hall pitchfork mentality, and I want to say that Shea Gibson is an amazing citizen, and we in the business community are grateful to his service and Block by Block for all these decades,” Morrill said.