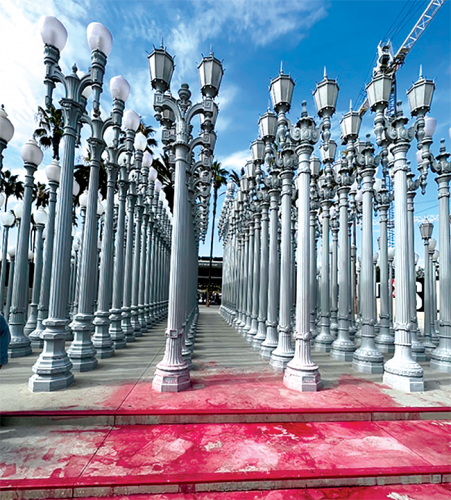 The Los Angeles Police Department’s Wilshire Division on July 28 responded to a protest that resulted in three arrests for felony vandalism after the Los Angeles County Museum of Art’s “Urban Light” was damaged.

Around noon, a group of about 25 protesters gathered near the intersection of Wilshire Boulevard and Ogden Street.

The protest was in support of a group, RiseUp4AbortionRights.org, according to the LAPD.

LAPD made multiple attempts to contact the group of protesters, who refused to leave the area, police said. Around 3:25 p.m., officers issued a dispersal order.

At 4 p.m., a second dispersal order was announced, and the crowd refused to leave the area, police said. At 4:10 p.m., uniformed resources, along with Metropolitan Division officers, arrested the two women and one man for felony vandalism. At 4:30 p.m., the area was cleared of all protesters without incident, according to the LAPD.

On July 29, the LAPD identified the three suspects as Sean David Gorman, of Upland; Leilah Bourn, of Los Angeles; and Victoria Eggers, of Westminster.

LACMA representatives said the exhibit reopened at 7 p.m. the same day, and it appeared that the liquid had been cleaned up as of July 29.

“A protest was held in front of Urban Light on July 28, and red dye was splashed on some lamp posts and the concrete around the work,” a LACMA spokesperson said. “Repairs to the damaged portions will be required.”

Representatives from RiseUp4AbortionRights.org did not respond to a request for comment.

According to its website, RiseUp4AbortionRights.org formed in January in response to the U.S. Supreme Court considering the possibility of overturning Roe v. Wade, which it ultimately did on June 24. The site lists Merle Hoffman, Lori Sokol and Sunsara Taylor as “initiators.”

On Instagram, the organization’s Los Angeles chapter posted images of its members chained to the light poles with a “sea of [fake dead] bodies, [coat] hangers and fake blood.”

“I am putting my body on the line here today as a call to action because we cannot sit idly by as we are robbed of our freedom, rights and futures,” said Lavi Bourne, according to an Instagram post. “No ‘business as usual’ when you take away our rights. We demand nationwide legal abortion now.”

“I enlisted to defend freedom not to have mine stolen! Together we can rise up for equality and human rights,” said Eggers, an organizer with the L.A. chapter of RiseUp4AbortionRights.org and Vets Rise For Roe, according to the post. “This is not a protest against LACMA, but a call to the arts community and to all of society: silence is compliance. Start taking action and rise up for abortion rights now.”

The chapter’s social media accounts also called on supporters to help bail out the three protestors who were arrested.

The late Chris Burden created “Urban Light,” which opened at LACMA in February 2008. It includes 202 historic streetlamps that were operational throughout Southern California during the 1920s and ‘30s. LACMA officials “indisputably” consider it to be the museum’s most popular artwork, according to the museum’s website.

“Damaging any work of art is a travesty,” Greater Miracle Mile Chamber of Commerce president Steve Kramer said. “Not only is it an iconic artwork – something usually doesn’t take just a few years to become iconic, but ‘Urban Light’ has been that. I just think it’s wrong.”

He said damaging a beloved piece of artwork in the community does not help in the fight for reproductive rights.

“It doesn’t bring anything to your position, just takes away from it,” Kramer added.

Anyone with information regarding the incident is urged to contact the police department at (877)LAPD247.

More boots on the ground on Hollywood Boulevard