‘The Bear’ is hungry for drama and a good meal 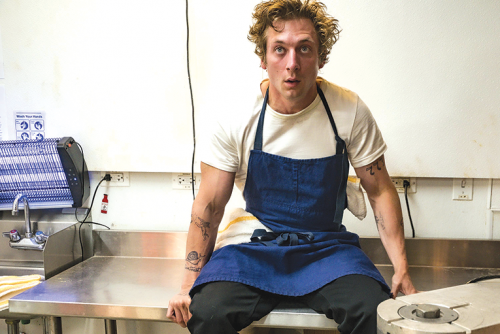 How often does a show induce anxiety and hunger in a single scene? That’s the power of “The Bear,” a stressful, addictive dive into prodigy chef Carmen Berzatto’s (Jeremy Allen White) kitchen in Chicago’s River North neighborhood.

What “Uncut Gems” does for New York, this Hulu-FX original attempts for the Windy City. But “The Bear,” amidst all the madness, is far more hopeful. But stressful, oh so stressful.

Carmy might be one of best chefs in the world, but he tends to drag employees into his past trauma. Luckily he’s in like-minded company. Following his brother’s (Jon Bernthal) tragic death, the former cuisine celeb inherited a mess, a family business about to ruin a second generation. The deceased patriarch managed money poorly, permitted unsavory side deals and borrowed money now lost.

His sister Sugar (Abby Elliott) wants it all to end, Uncle Jimmy (Oliver Platt) would even take the place off his hands, but Carmy won’t quit. He plans to save the terribly named sandwich shop, perhaps learn more about the brother who refused to let him in that eatery then willed it to him.

So now Carmy must save the day, everyone yelling at him and vice versa. But this is a family, dysfunctional, yes, but committed to each other and their craft.

And for all his disorganization, his outbursts, Carmy knows his craft. He keeps the kitchen clean, stays late and passes out at home, cigarette dwindling on the coffee table, only a PB&J for sustenance (perhaps a good meal triggers his time at a wretched but classy New York restaurant). The bread maker stops working and the oven dries it all out. No worries, he knows how to fix it with a pan of water below the rolls.

That’s the draw of “The Bear” (you’ll have to watch and debate the show name’s meaning). If functions like a combination of fail and win videos scattered across virtual platforms. Each culinary victory accompanies a new road block, from kitchen fires and broken machines to customer brawls and heaps of in-house turmoil.

Everything relies on White’s performance. And the “Shameless” star, back in another Chicago setting, delivers a delicious performance. Unhinged, kind, definitely drowning. This is a special character piece because of the emotional spiral he delivers.

The other players involved also deserve credit. First up, Sydney (Ayo Edebiri), formally trained like Carmy, but much younger, her spirit a bit more intact. Fond memories of the Beef and respect for Carmy’s prestige keep her around, despite a toxic work culture.

What kitchen wouldn’t be complete without some dead weight. Meet Richie (Ebon Moss-Bachrach), Carmy’s “cousin” who works the front. He detests any changes, holding strong to an idea of old school Chicago that already took down several nearby establishments.

“The Bear” also makes an incredible case for shorter run times. Technically deemed a dramedy, though no laughs ever arrive, each of the eight episodes runs fewer than 30 minutes. Anymore would be too much. This permits creator Christopher Storer (FX’s “Ramy”) to condense, rather than out, central themes. It all flows like short films connected by the same themes, locals and even a mystery that pays off big in the final installment.