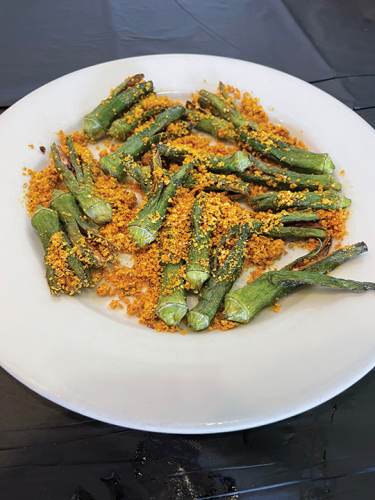 Located in a strip mall in Culver City is Banana Leaf, a new Southern Indian restaurant by owner Sri Sambaing. I was invited to join other restaurant reviewing colleagues for a multi-course tasting. One guest at the table was high school graduate and recent Career through Culinary Arts Program scholarship winner, Carlos Dominguez.

“There is so much energy in Indian cuisine. The colors are a feast for your eyes,” said the young man who is studying to become a chef and just earned an internship at the Jonathan Club. C-CAP, a nonprofit organization started in 1990 by celebrity chef Marcus Samuelsson, is a program that provides underserved youth with classes, field trips, internships and job opportunities in the culinary arts.

A potpourri of pleasing aromatics wafted through the dining room as the dishes were presented. Sambaing wanted us to experience an array of regional Southern Indian home cooked dishes and popular street food items that he grew up eating.

A variety of cooling beverages were presented with each dish, including a ginger, celery and lime elixir to wake up our senses. “It’s a savory drink to start your meal,” Sambaing said. “It’s not to be sipped, but to down it in one shot.” A house made lime soda was served with a little salt on the bottom of a glass, a squeeze of fresh lime juice and bubbly water. It was very refreshing on a hot summer day.

The first dish was an Indian-style fried chicken, first introduced in 1965 at the Buhari Hotel in Chennai, India. The spicy, deep-fried Chicken 65 achieves its red color from red chili powder. The bite size chicken was marinated in yogurt, curry leaves and spices that include turmeric and garam marsala and fried until crisp on the outside yet stays juicy inside.

The boneless fried fish appetizer was marinated for 15 minutes in turmeric, ginger, garlic, coriander, cumin and salt and served in a yellow curry sauce made with yogurt, garlic, masala, salt, curry and oil – a very pleasing dish.

When the goat curry arrived with slices of red onions to add a pop of color and flavor, I took one bite of the coriander seasoned sautéed meat and wanted more. The tender goat was marinated and simmered in spices to achieve a depth of flavor. Sautéed onions, tomatoes and garlic are pureed into to a savory sauce, with aromatic spices, dried red chili powder and cashews sprinkled on top.

Biryani, an Indian classic passed down through generations, is a special rice dish topped with chicken and served with sliced limes, red onions and raita, yogurt with chopped vegetables to cool a dish. The heart shaped tandoori style chicken breast was cooked perfectly.

Cool green mango dal, a lentil dish made with garlic and ginger, was served with a bowl of white rice and plain and garlic naan. This traditional Indian flatbread is made with flour, yeast, yogurt, a pinch of salt and sugar. Baked in a tandoori oven, the golden naan is brushed with butter or ghee, and then topped with minced garlic.

Shrimp in green roselle leaves and sag paneer made with spinach was ladeled into bowls. The panner is cheese made from curdled milk with lime or lemon juice. It’s firm on the outside and resembles tofu. The velvety leaf sag originated in the northern Punjab region, and the Southern version is enhanced with garlic, onions and red chilies in a sauté pan, with a little olive oil and blend of seasonings.

Sambaing said the philosophy at Banana Leaf is “Atithi Devo Bhava,” – “the guest is equivalent to god.” Sambaing kindly prepares five full meals a day to give to customers unable to pay. He has also established a sponsoring affiliation with the UCLA hosted dinner project.