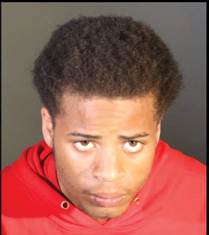 The U.S. Marshals Service offered a $5,000 reward on July 18 for information leading to the arrest of a male suspect accused of shooting pop star Lady Gaga’s dogwalker during a robbery in Hollywood in February 2021.

The suspect, James Howard Jackson, 19, is one of three men charged with attempted murder and robbery following the shooting and theft of two French bulldogs on Feb. 24, 2021. Jackson remains at large after mistakenly being released from custody on April 6 due to a clerical error by the Los Angeles County Sheriff’s Department.

The crime occurred as the victim, Ryan Fischer, was walking three of the pop star’s dogs in the 1500 block of North Sierra Bonita Avenue, just north of Sunset Boulevard. The suspects, who police later identified as Jackson, Jaylin White, 19, and Lafayette Whaley, 27, allegedly got out of a vehicle and attempted to steal the dogs. Fischer resisted and one of the suspects – believed to be Jackson – shot him, police said. The suspects fled with two of the bulldogs, named Koji and Gustav. Fischer was taken to Cedars-Sinai Medical Center after the shooting and has since recovered.

The French bulldogs were located on Feb. 26, 2021, when a woman identified as Jennifer McBride brought them to the Los Angeles Police Department’s Olympic Division and claimed she found them tied to a pole, police said. Detectives later determined McBride was the girlfriend of Harold White, the father of one of the three suspects allegedly involved in the shooting and robbery of the dogwalker. Both McBride and Howard White have been charged with being accessories after the fact.

Jackson, Jaylin White and Whaley, 27, were arrested on April 29, 2021, and were all charged with one count of attempted murder, conspiracy to commit robbery and second-degree robbery. White and Whaley remain in custody and are next expected to appear in court on Aug. 3. McBride and Harold White have been released on bail, according the sheriff’s department inmate records.

The Los Angeles County District Attorney’s Office said Jackson was mistakenly released after initial charges against him were dropped and replaced with new charges in a superseding indictment. The sheriff’s department has not stated how the error occurred. According to an official sheriff’s department statement, “The investigation is continuing and the LASD Major Crimes Bureau is actively working to get Mr. Jackson back in custody.”

The U.S. Marshals Service said on July 18 that the LASD Major Crime Bureau requested its assistance in locating and arresting Jackson, who they said could be armed and dangerous. Jackson is described as Black, approximately 5 feet 6 inches tall and 120 pounds with black hair and brown eyes.

Anyone with information about Jackson’s whereabouts is asked to immediately contact law enforcement by calling 911, or the sheriff’s department’s Major Crimes Bureau at (562)755-9717 or (626)590-3207. Tips may be submitted to the U.S. Marshals Service by visiting usmarshals.gov.

Officer grazed in shooting after robbery on Melrose