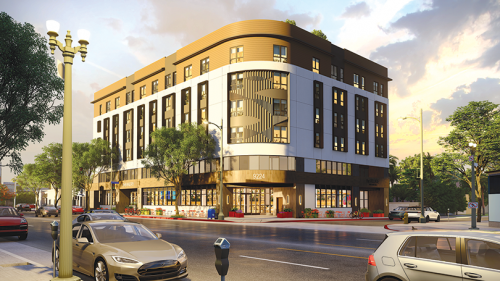 The Village will provide 64 units of housing above ground-floor retail space at the corner of Pico Boulevard and Glenville Drive. (photo courtesy of Cornerstone Housing for Adults With Disabilities)

A unique housing project that will enable people with intellectual and developmental disabilities to live independently is coming to 9224 W. Pico Blvd.

Work on The Village, a project by Cornerstone Housing for Adults With Disabilities, is scheduled to begin in September at the corner of Pico Boulevard and Glenville Drive. The seven-story project, which has city approvals, will include 64 apartments, including eight designated for low-income individuals.

Residents will receive services from the nonprofit ETTA, a sister-organization to Cornerstone that specializes in support for adults with developmental disabilities. Resources will include individualized support, social and educational programming and opportunities for vocational enrichment and recreation.

“It’s intended for individuals who have a goal of being independent, living on their own, but may need some support systems,” said Josh Taff, director of intake and community relations for ETTA. “It’s the first of its kind in the area. Cornerstone will be building the project and ETTA will be a provider on-site.”

The rent for the units will be market rate or below, but the specific amounts have not been established, Taff said. He added that many of the people who will live in the units receive government assistance and financial support from their families.

The project will include 10,000 square feet of ground-floor retail space. Taff said a tenant has not yet been selected, and they are looking for a neighborhood-serving business such as a market.

Cornerstone is building the $55 million project with funds generated through a capital campaign, as well as $9 million allocated this year in the California state budget. The project has received support from government officials including Assemblyman Richard Bloom (D-Santa Monica) and Sen. Ben Allen (D-Santa Monica).

“We’re extremely grateful for the support we’ve received from our representatives and the state of California,” ETTA executive director Dr. Michael Held. “Along with the incredible generosity of our community of donors, these funds will help ensure that adults with developmental differences have a place to call home and a path to independence.”

Taff said approximately 160 people have already inquired about renting in the building, illustrating the need for supportive housing. A specific date has not been set for a groundbreaking ceremony. The project is anticipated to open in summer 2024.

Fire at playground illustrates need for police in park