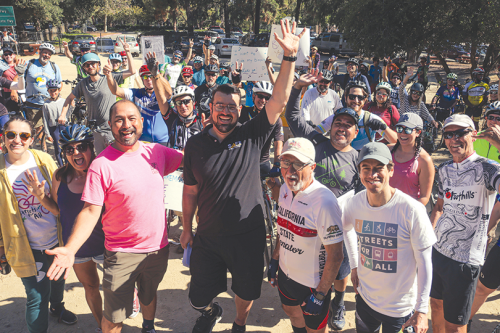 Damian Kevitt, center, founder of Streets Are For Everyone, led a celebratory ride through Griffith Park after a road was closed to vehicles. (photo by Solomon Hernandez)

The city of Los Angeles and the nonprofit Streets Are For Everyone took measures on July 2 to make pedestrians and cyclists safer by closing a portion of Griffith Park Drive to vehicular traffic.

Under a pilot program that will last at least six weeks, a three-quarter-mile stretch of Griffith Park Drive will be closed to cars between Zoo Drive (near Travel Town) and the Griffith Park composting facility. Griffith Park Road diagonally traverses Griffith Park north and south and is frequently used by drivers as a cut-through route between the San Fernando Valley and the Los Feliz District, said Streets Are For Everyone founder Damian Kevitt. The organization has advocated for improved safety in Griffith Park and throughout the city, and is working with the Los Angeles Department of Recreation and Parks and Councilwoman Nithya Raman’s office to implement measures such as the road closure. After the pilot period, the closure’s benefits and effects will be evaluated and the city will determine whether to permanently close the road to vehicles.

Kevitt experienced first-hand the dangers of cycling in Griffith Park. He was struck by a minivan while riding on Zoo Drive near the Autry Museum on Feb. 17, 2013. Kevitt suffered more than 20 broken bones, spent four months in the hospital and his right leg was amputated. When he recovered, he dedicated his life to making streets safer for cyclists, pedestrians and everyone using alternative modes of transportation.

Kevitt said the effort to improve safety in Griffith Park gained momentum after the death of Andrew Jelmert, a 77-year-old cyclist who was struck and killed by an alleged drunk driver on April 16 on Crystal Springs Drive, north of Los Feliz Boulevard. Jelmert was training for the AIDS LifeCycle, an annual ride from San Francisco to Los Angeles held by the Los Angeles LGBT Center.

Jairo Martinez, 37, the driver who struck Jelmert, has pleaded not guilty to murder and other charges stemming from the collision. Witnesses told police that Martinez was traveling approximately 80 mph through the park when he struck Jelmert. Raman said her office has been exploring ways to improve safety in the park.

“[Andrew Jelmert’s] sudden and incredibly tragic death … really made this an intervention with real urgency behind it,” she said, adding that the closure is a way to make the park safer for “passive recreation.”

Kevitt said vehicles frequently speed in the park, and he has evidence. Streets Are For Everyone conducted a speed survey from May 13-June 12 that determined 75% of all cars traveling through the park were going more than 5 mph over the speed limit. The average speed of cars was 35 mph, while the speed limit is 25 mph. Some vehicles were traveling at more than 60 mph, he said. During evening rush hour periods, 80% of all cars were found to be speeding more than 5 mph over the speed limit and the average speed of vehicles traveling through the park was 36 mph.

“This was about protecting users of the park, pedestrian, equestrians and bicyclists,” Kevitt added. “And we are just getting started. It’s a small step but we have more planned in terms of making the park safer.”

Those plans, pending city approval, include improved signage and restriping on major roads in Griffith Park and lane reductions on Crystal Springs Drive. Kevitt also said he is advocating for Crystal Springs Drive to be reduced to one lane in each direction to reduce traffic speeds.

“Griffith Park is for the community, not the commute,” he added.

“Three-quarters of a mile up Griffith Park Drive is the mere beginning,” Kaufman added. “There are many more accessible roadways in the park that would be more accessible to people ages 8 to 88 if they were car-free. These streets should be for bicyclists, equestrians and pedestrians, not cars. Griffith Park is a recreational space and the fact that people’s lives are in danger because of cut-through traffic is unacceptable.”