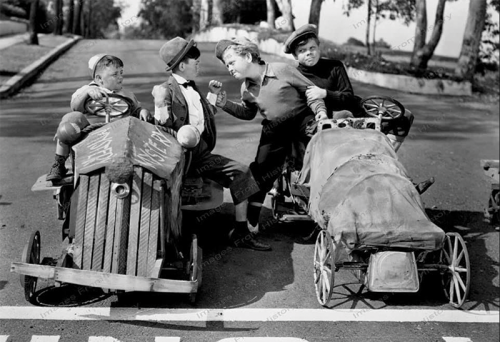 “Our Gang” was a popular short film series that was produced continuously from 1922 through 1944. (photo courtesy of the Hollywood Museum)

The Hollywood has announced its newest exhibit, “Our Gang,” which officially opened with a gala VIP reception on July 27.

Donelle Dadigan, founder and president of the Hollywood Museum said the museum would be paying tribute to and celebrating the 100th Anniversary of the Hal Roach’s film shorts.

“Our Gang” comedy film shorts were first presented in movie theaters in 1922 and continued through 1944. This series broke new ground portraying white and black children having fun and interacting as equals during the Jim Crow era in the United States. Writers on the series of film shorts included Frank Capra, Walter Lantz, Leo McCarey and Roach himself.

“This is an exhibit that movie enthusiasts will enjoy, as well as families who have enjoyed ‘Our Gang’ on film, in television syndication over the years and the ‘Our Gang’ animated series,” Dadigan said. ‘Our Gang’ has been part of the fabric of film culture from 1922 thru 2022, entertaining generations of kids and adults of all ages for 100 years.”

Dadigan also added a tease about the exhibit.

“The exhibit will solve the mystery/myth about Pete the Pup and the black ring from the ‘Our Gang’ film shorts,’ Dadigan said.

The Hollywood Museum is open Wednesday-Sunday from 10 a.m.-5 p.m. It is located at 1660 North Highland Ave. For tickets and information, visit thehollywoodmuseum.com or call (323)464-7776.