One in custody following robbery in WeHo 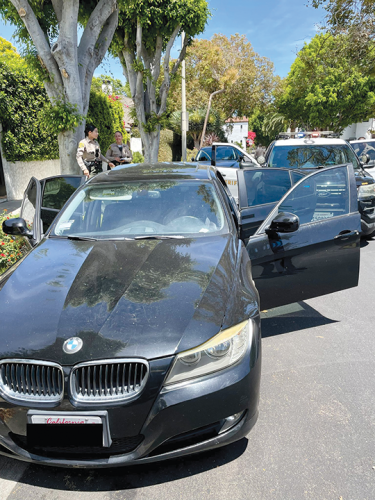 Deputies in West Hollywood recovered a vehicle allegedly stolen during a robbery and carjacking on July 17. (photo courtesy of the LASD)

Deputies from the West Hollywood Sheriff’s Station arrested a male suspect on July 19 who allegedly robbed and carjacked a man two days earlier outside his residence in the 1000 block of Edinburgh Avenue.

The robbery occurred at 4:30 a.m. as the victim was outside standing near his vehicle, Sgt. Joana Warren said. Three male suspects approached on foot and struck the victim, who fell to the ground, she added. The suspects stole a cell phone, wallet and keys, and then drove away in the victim’s car.

Warren said the victim initially had difficulty providing information about his vehicle, a black BMW sedan that he recently purchased, so deputies could not locate the car. The victim obtained the license plate number and information about the vehicle from the seller and provided it to investigators, Warren said.

On July 19, patrol deputies saw the vehicle parked near Flores Street and Rosewood Avenue with two people inside. They detained the male driver and female passenger, both of whom denied knowing the vehicle was stolen during a robbery. The female passenger is not believed to have been involved in the initial crime and was released. Deputies arrested the male driver for robbery. Warren said the suspect is 41 years old, but did not provide his name or city of residence.

The robbery remains under investigation and detectives are searching for the other two suspects. Anyone with information is urged to call the West Hollywood Sheriff’s Station at (310)855-8850.