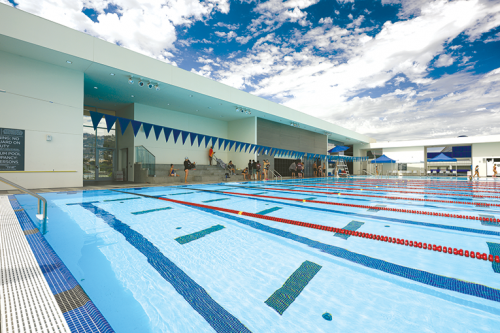 The West Hollywood Aquatic and Recreation Center is one step closer to opening this summer. It will provide many programs and activities for the community. (photo by Jon Viscott)

The city of West Hollywood has received a Certificate of Occupancy for the Aquatic and Recreation Center at West Hollywood Park. Public access to the ARC will be accomplished in a phased approach to protect the safety and welfare of the public and users of the facility. In anticipation of receiving the CofO, the city’s Recreation Services Division staff has been working on the beginning stages of phasing in public use and programming beginning with swim lessons, tiny tot programming and limited gymnasium use. The division has been working with the various groups and stakeholders on timelines and accessibility and is working towards the expansion and use of the ARC over the next several weeks and months ahead.

The phased opening process provides the necessary integrated training scenarios for staff to become familiar with programs, constituent patterns and access throughout the new facility. During the first phase of the ARC opening, recreation programs, events, contract classes and user groups will slowly begin use of the ARC as staff begin to lead programs and work in the facility on a day-to-day basis. Subsequent phasing for both the park and aquatics will include extended hours and additional programs and activities programmed and led by the city’s recreation services staff, contract instructors or community organizations.

The initial phased opening programs are the Aquatic Center, which will have swim lessons, a junior lifeguard program and a phased opening to limited user groups will begin. Over the next few weeks, additional aquatic programming will become available for user groups, lap swim, fitness club, recreational swim and Splash Camp.

The Recreation Center will offer programs and activities such as Fundamentals of Sports, Tot Time Camp, Tiny Tots, Summer Camp and a phased opening to select user groups has also begun.

An official opening ceremony is anticipated to be scheduled for later this summer, with details forthcoming at weho.org/calendar.

‘Moulin Rouge’ does the can, can can at the Pantages