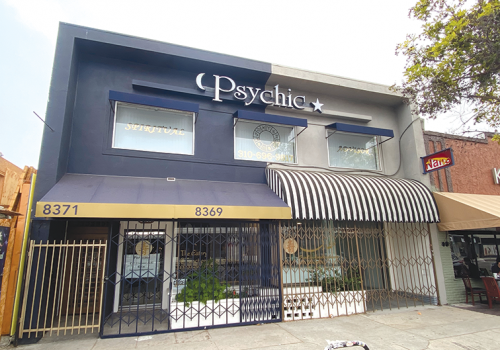 Firefighters rescued a man stuck in a ventilation shaft in a building at 8367 W. Beverly Blvd. (photo by Edwin Folven)

A man who authorities described as a transient was rescued by firefighters on July 25 after he was trapped in a vertical ventilation shaft in a building at 8367 W. Beverly Blvd., just west of Kings Road. After being rescued, police arrested the man for attempted burglary.

The Los Angeles Fire Department received a call shortly after 3 p.m. from someone who heard strange noises in the building, LAFD spokesman Brian Humphrey said. He added that the unit in the two-story building where the man was located is currently vacant. He did not know who called the fire department, but surmised it was a security guard, employee or other tenant. A psychic has a business operating on the top floor of the building. A woman who answered a phone number for the psychic said she was not there when the man was trapped and had no information about the incident.

Firefighters found the man, who is in his mid-20s, trapped feet-first approximately 11 feet down an 18 inch wide ventilation shaft between the roof and a kitchen, Humphrey said. They called an LAFD Urban Search and Rescue team specially trained in rescuing people from confined spaces, and a ladder was used to lower a harness into the shaft. The man had one hand free and grabbed the harness, enabling firefighters to lift him up and out of the shaft, Humphrey added.

“We weren’t sure actually how much work we would have to do to get him out,” he said. “He had no visible injuries and declined transportation to a hospital.”

The incident concluded around 4 p.m. The man, who was nude, claimed he had been trapped in the shaft for 24 hours, but showed no signs of being confined for a lengthy period of time, Humphrey said.

Lt. Gus Barrientos, with the Los Angeles Police Department’s Wilshire Division, said police believe the man entered the shaft in an attempt to commit a burglary. He said the man was taken into custody, but did not have any further information. Authorities ensured the building was secure before leaving.

One in custody following robbery in WeHo