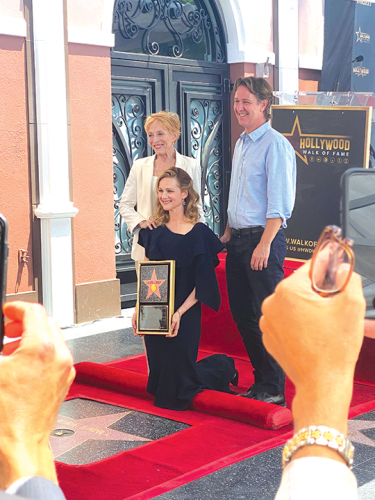 Laura Linney received the 2727th star on the Hollywood Walk of Fame on July 25, with actress Holland Taylor and “Ozark” showrunner Chris Mundy appearing alongside her.

During the Hollywood Walk of Fame ceremony on July 25 honored Laura Linney, a man caused a commotion, briefly halting the installation.

“Is he okay?” asked Linney. “Is he alright? I just want to make sure he’s okay.”

The man was escorted away by event security. A common sight in Hollywood, Linney took the opportunity to highlight what matters to her.

“It’s a difficult world we’re living in these days. Things like this are intersecting everywhere. So, on this day … since it is Laura Linney Day, I hope that we can all keep a little compassion in our hearts and educate ourselves about the needs of others and mental illness and addiction and everything that is being put in front of us on a daily basis.”

The moment encapsulated what Linney’s two speakers at the ceremony said about the actress’ true spirit.

“Almost 25 years ago while shooting ‘The Truman Show,’ [at] the fairytale seaside town in Florida, Laura had taken a house, and at an early rehearsal, knowing I was stuck in some Radison or whatever, she impulsively said, ‘Come stay in my house. It’s huge and airy,’” actress Holland Taylor said. “I was so startled I didn’t know how to respond, except to say ‘Gee, okay.’ So, we hung out over the weeks, and I realized at some point that she was a gift in my life. Laura’s generosity is like throwing money off the back of trains, full of air and sunlight. As with my stay under her roof, her gifts are given so lightly you hardly know whatever has blessed you.”

“I’ve never met anyone truly in work or life that elevates the people around her,” said Chris Mundy, the showrunner for Linney’s series “Ozark.” “In the work, with generosity and dedication but more importantly in friendships. Everyone’s life is better for having Laura in it, and I know so many different people that use her as kind of a compass of what the right way is to behave or consider in a situation. And to be that for such a diverse group of people is truly phenomenal.”

Linney’s star was placed next to that of her “Ozark” character’s husband, Jason Bateman. The series has garnered Linney critical acclaim and three Emmy nominations, but her storied career dates back decades. Born in Manhattan, Linney graduated from Brown University and studied acting at the Juilliard School.

Her television work has also included the Showtime Series “The Big C” and the HBO miniseries “John Adams.” Both projects netted her Emmys, as did the 2001 television film “Wild Iris” and a guest spot on the series “Frasier.” She has also won two Golden Globes and a Screen Actors Guild Award, and has been nominated for three Academy Awards. Her films have included “Kinsey,” “Nocturnal Animals,” Mystic River” and “Love Actually.”

Additionally, Linney has been nominated for five Tonys, performing in the plays “The Crucible,” “Sight Unseen,” “Time Stands Still,” “The Little Foxes” and the one-woman show “My Name is Lucy Barton.”

“As for the actress, I have a sudden insight,” Taylor said. “In all her shows and movies, curiously, Laura looks very much as she does in life. Mostly quite contemporary. Very few roles required her to change anything about how she looks. You know her, how she speaks, how she wears her hair. I can’t offhand remember accents that she’s had to use. Up on screen, at first glance, she just seems like Laura Linney. But equally curiously and to the point, when I am in her audience, lost in whatever performance she is giving, I can’t see Laura at all. I don’t see Laura Linney. I see who she is playing. She has captured me in plain sight, exactly as her generosity does, a kind of sleight of hand.”

Taylor went on to say that Linney was “no smoke, no mirrors, just magic.”

“I know if she could, she’d take her name off of [the sidewalk] and fill it in with all of the characters that she’s played on stage and on television and in films, but it would take the block,” Mundy said. “So, I’m just going to say that I’m incredibly happy that it’s there, and I’m incredibly happy that it’s permanent, and she gets to face it and look at it and realize that it’s only there because of her work.”

And for Linney, it’s about the work and the art that work provides the world.

“The work hopefully not only enhances our perceptions of each other in both modest and even significant ways, but it can also visually or emotionally expose viewers to the previously unseen or unfelt,” Linney said. “It can introduce us all to parts of ourselves we had no idea existed. In a time when our world is so challenging, so much is confusing and chaotic and upsetting, it is the one tenant the holds firm to me, especially during this unstable time … that the arts are medicinal, clarifying, nourishing endeavor, and it is a wonderful thing to be in service, too. Much in today’s world is a waste of time. We squander what is valuable. But you can’t go wrong with time spent with and around the arts, regardless of your profession or your belief system, the arts are just good for you.”

What will these smiling Irish eyes see?