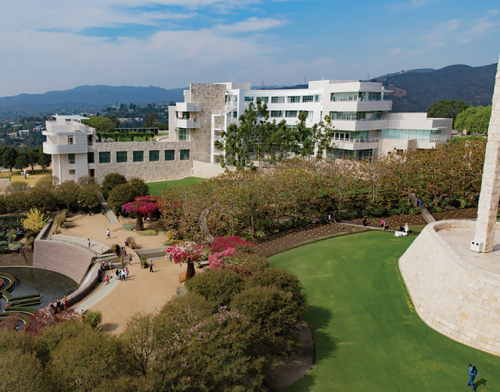 The Getty Research Institute will host researchers for the 2022/2023 scholar year. (photo courtesy of The Getty)

The Getty Research Institute welcomes this year’s scholars, who will be conducting research on the themes of art and migration and the Levant and the classical world during the 2022/2023 scholar year.

Migration has persisted as a powerful subject of art ever since modern humans began to move across the planet, bringing their objects and technologies with them. Whether in Mesoamerica, the ancient Mediterranean, or medieval Africa, war, invasion, colonialism, enslavement, resettlement and trade have fundamentally altered cultural production, reception and rituals. Considering the many ongoing migration crises throughout the world, this theme invites scholars to respond to the movement of people and artifacts in myriad ways.

For the third year, the Getty Scholars Program at the Villa will focus on the ancient cultures of the Levant and their relations with the classical world. Lying on the eastern seaboard of the Mediterranean, the Levant was a crucial crossroads between the classical world of Greece and Rome and the kingdoms of the Near East. Home to the ancient peoples of Phoenicia, Ugarit, Canaan, Philistia, Jordan, Israel and Judah, this region participated in a vibrant Bronze-Age network of trade that flourished for many centuries until a combination of warfare, migration, and famine around 1200 BCE destroyed these palace societies.

Additionally, two opportunities for nine-month residencies have been created under the Getty’s African American Art History Initiative, a program that aims to address an incomplete version of American art history by increasing the Research Institute’s African American-related collections, research, exhibitions, projects, publications, events and partnerships with local and national institutions. As part of the larger scholar year cohort, AAAHI fellows will have opportunities to present their research and receive feedback from an interdisciplinary group of peers.

For information about the Getty Research Institute, visit getty.edu /research.

Grand Park, powered by The Music Center, continues to celebrate its momentous 10th anniversary with another free signature event, B-Boy B-Girl Summit Reborn, a symposium highlighting the dance forms of locking and popping.

A special blend of hip-hop culture and eye-popping street performances, B-Boy B-Girl Summit Reborn returns to the park for everyone in a blaze of glory on Sunday, July 17, from noon – 8 p.m.

The eight-hour event, with the theme “Reborn,” will treat eventgoers to breakdancing (breakin’), popping and rapping performances along with DJs and graffiti art. Additional attractions include a variety of food trucks, local vendors and a kids craft area.