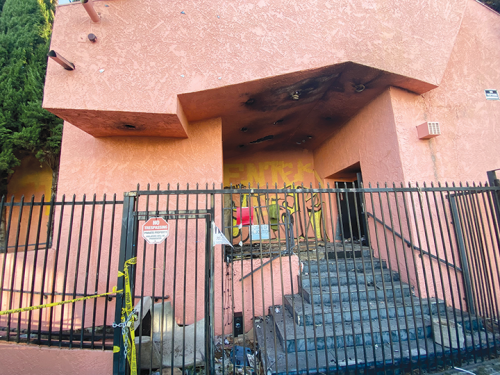 The city red-tagged the building after the fire, deeming it uninhabitable. (photo by Edwin Folven)

Los Angeles Fire Department personnel extinguished a blaze in a vacant building at 1435 N. Las Palmas Ave. on July 13 and prevented the flames from spreading to surrounding residential structures and a motel on Sunset Boulevard. The fire was reported at approximately 8:37 a.m. and fully extinguished in approximately two hours. Firefighters arrived to find smoke emanating from the structure, which was built in 1905, LAFD spokesman Nicholas Prange said. It was not known how long the building had been vacant. The site was formerly used as a small theater and rental space for events.

No injuries were reported. LAFD investigators questioned two people at the scene but no arrests were made and the cause remains under investigation.

The roof collapsed during the fire, structurally compromising the building. The Los Angeles Department of Building and Safety red-tagged the structure, deeming it uninhabitable.