Everything, everywhere all in ‘Rouge’ 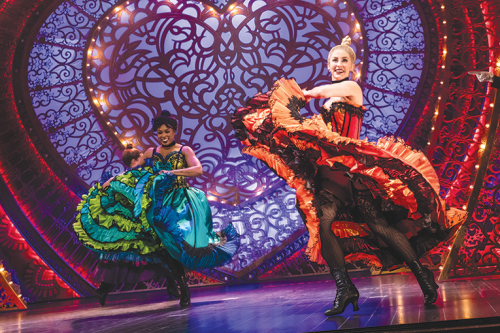 Conor Ryan and Courtney Reed star in “Moulin Rouge! The Musical” playing at the Hollywood Pantages Theatre through Sept. 4. (photo by Matthew Murphy for MurphyMade)

The second act of “Moulin Rouge! The Musical” opens with an elaborate cover of Lady Gaga’s “Bad Romance.” In the spirit of the original 2001 film on which the play is based, other songs weave into the melody, including Eurythmics’ “Sweet Dreams (Are Made of These)” and Britney Spears’ “Toxic.” The scene represents the show at its very best, simultaneously following the story of the central Christian (Conor Ryan) and Satine (Courtney Reed), the backstage drama surrounding the musical-within-a-musical and a side affair with Santiago (Gabe Martinez) and Nini (Libby Lloyd).

When the company stuck the landing of the number on opening night, each member of the ensemble striking a pose Gaga herself would admire, the audience rose to their feet, giving a standing ovation mid-show. If the “Moulin Rouge! The Musical” touring crew can maintain that energy through September, Los Angeles is in for a rollicking two months.

It’s a tough act to follow. The box office sleeper hit from 21-years ago paired two Bonafide movie stars, Nicole Kidman and Ewan McGregor, with the eclectic, spastic, unique style of director and co-writer Baz Luhrmann. Like that film, the musical tells the story of Christian, who comes to Paris to find himself at the turn of the 20th century, only to discover doomed fate with the beautiful Satine, a stage-performer at the Moulin Rouge. Also like the movie, the stage show doesn’t rely on original or period-appropriate songs, instead mashing up covers of well-known songs dating back hundreds of years and heavily lifting from the best-of-the-best Top 40.

Unlike the movie, Christian is no longer just a writer, he is a songwriter, and he is postured as the genius behind many of the tunes sampled on the soundtrack, making this writer wonder if there’s an opportunity for a Christian multiverse … but I digress.

The complications in the romance of Christian and Satine include a terminal illness and the fabulously wealthy Duke de Monroth (David Harris), who wants Satine above all costs. This characterization is perhaps the greatest diversion from the source material, with the previously rigid, pretentious duke given a darker, sexier edge. It is a fascinating alteration, lending a dangerous bent to his scenes with Satine. When he threatens death, you have no doubt he could kill.

Where McGregor’s Christian was a brooding, starving artist, the show paints Christian as something closer to a naïve, young kid who finds out that in the real world, money talks. Ryan is tasked with filling the shoes of Aaron Tveit, who won a Tony Award for the role in a strange, COVID-affected year that found him the only actor nominated in the category. It is with Christian that the audience must identify, otherwise his professions of love and passion over the run of the show fall flat. Ryan, possessing both sterling pipes and a relatable, boy-next-door air, has the audience in the palm of his hand from the first note.

First and foremost, though, “Moulin Rouge! The Musical” is a spectacle of the first degree. Housed inside the historic Pantages Theatre for its L.A. run, the company has taken the venue and added thematic elements, including a giant elephant adorning the side of the stage. The sets morph miraculously, one moment the frenetic nightclub of the title, the next the bustling streets of Paris, the next Staine’s seductive dressing chambers.

In order to make Luhrmann work on stage, you have to make every moment an indulgent spectacle. One of the century’s most unique and divisive filmmakers (see “Elvis” in theaters now), his style fills fast-cutting frames with color and activity. The show works because, like the film, it inundates the audience with sensory elements, pummeling the razzle and dazzle and taking you on a magic carpet ride with a simple, timeless love story set to the tune of a million familiar love songs. It doesn’t aim to reinvent the wheel. It instead just wants to earnestly entertain you, and the show never quits pulling out stops to that end.

And perhaps even when the most high-minded of theatre patrons get to the crowd-pleasing, wink-and-nudge numbers embedded within its score, they, too, will bounce to their feet to give this company the ovation they so squarely deserve.

“Moulin Rouge! The Musical” is playing at the Hollywood Pantages Theatre through Sept. 4. Performances at 8 p.m. Tuesday-Saturday, Sunday at 6:30 p.m., with matinees on Saturday at 2 p.m. and Sunday at 1 p.m. Individual tickets start at $39 and can be purchased by visiting broadwayinhollywood.com, ticketmaster.com, calling (800)982-2787 or in-person at the Pantages, which is located at 6233 Hollywood Blvd.

Encuentros to play at the Bowl