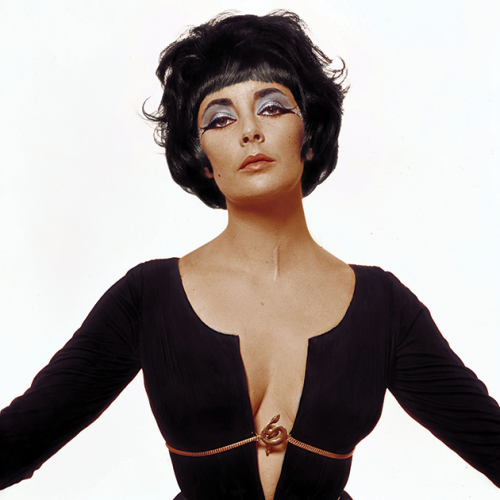 Elizabeth Taylor took pictures with photographer Bert Stern throughout the filming of the movie “Cleopatra.” (photo courtesy of the Bert Stern Trust)

The Beverly Hills Hotel is part­nering with the Bert Stern Trust to showcase striking images of Elizabeth Taylor taken by the leg­endary photographer. The photog­raphy exhibition will feature twelve large images including several never-been-seen photos that tell the story of Elizabeth Taylor during the years of filming “Cleopatra,” including her pas­sionate love affair with Richard Burton.

“What makes a great model is her need, her desire; and it’s excit­ing to photograph desire,” Stern said.

The Beverly Hills Hotel served as a backdrop to Elizabeth Taylor’s life in California dating back to her childhood. Her father Francis, who inspired her love of art, had a gallery in the hotel’s promenade and she went on to be a frequent guest of the hotel throughout her life. Affectionately known as “the Pink Palace,” The Beverly Hills Hotel’s famed bun­galows are where Elizabeth Taylor spent several of her honey­moons. She dined regularly at the hotel’s iconic Polo Lounge where her “splurge” day favorite of “fried chicken with mashed potato and lots of gravy” is still served, and celebrated iconic moments of her life, such as her Oscar win for “BUtterfield 8” at the hotel. After her passing in 2011, Elizabeth Taylor’s family hosted a private gathering in the star’s favorite Bungalow 5. The hotel recently formed a partnership with House of Taylor in honor of the leg­endary star and activist and renamed the famed bungalow Elizabeth Taylor Bungalow 5.

The exhibition is complimenta­ry and open to the public Aug. 1 – Sept. 30, seven days a week. All photos are available for purchase and a portion of the proceeds will benefit House of Taylor.

The Beverly Hills Hotel is located at 9641 Sunset Blvd. For information on the hotel, visit dorchestercollection.com/en/los-angeles/the-beverly-hills-hotel.

‘The Bear’ is hungry for drama and a good meal