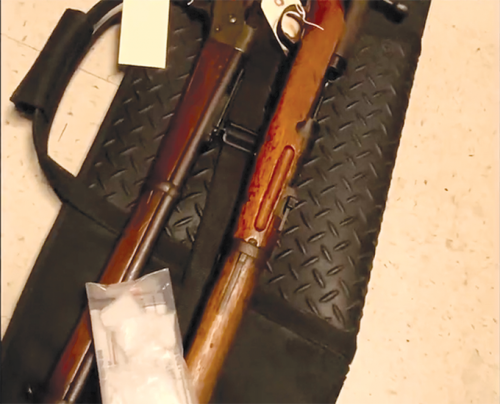 Guns and drugs were located in the storage rooms where the men were allegedly staying. (photo courtesy of the West Hollywood Sheriff’s Station)

West Hollywood Sheriff’s Station deputies arrested three men on June 29 on burglary charges after they were found living in storage rooms at an apartment building in the 8400 block of De Longpre Avenue.

Authorities recovered two rifles, a large amount of ammunition and methamphetamine the men allegedly stashed in the storage rooms. Investigators believe they are transients who were illegally staying at the building and may have been committing thefts in the surrounding community.

Capt. Bill Moulder said residents complained to management and called police about people in the rooms who didn’t belong there. He said the suspects lied to residents, telling them they were from a crew working on the building.

Moulder did not know how long the suspects had been staying at the building, but he said calls were received last week and deputies went to the location on June 28. They did not find the alleged perpetrators. However, deputies recovered a stolen scooter-like motorcycle parked nearby, Moulder added. On June 29, deputies returned and found the men in the rooms.

“[The property management] asked us to do a sweep and filed a letter of agency, which allows us to arrest people if they are trespassing. We went in and found three people living there,” Moulder said. “We found some rifles and a large quantity of ammunition and a large amount of narcotics. We think they have been committing other theft-related crimes in West Hollywood and are checking that.”

The men were identified as Israel Gonzales, 42, Julian Unruh, 38, and Gueslly Deravine, 32. They were charged with burglary and each held on $50,000 bail. Moulder said detectives are investigating the firearms and ammunition to determine if they were stolen. The suspects could face further charges, including the theft of the scooter, which was stolen in West Hollywood in June.

“We are happy to have made the arrests. These types of arrests can make West Hollywood safer,” Moulder added. “They all had criminal records. We think this will have an impact on theft-related crimes in the community.”

Moulder said property owners and managers can call the sheriff’s station to inquire about filing a letter of agency, which gives deputies authorization to arrest trespassers on private property. He said such authorization is usually granted when buildings are closed or vacant, and when crimes occur repeatedly at a specific site. For information, call (310)855-8850 ext. 4034 or 4037, or visit wehosheriff.com.