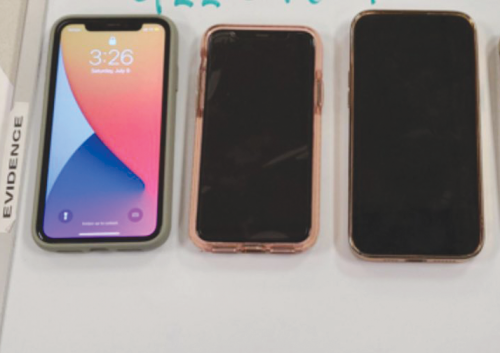 Authorities released a photograph of some of the stolen cell phones that were recovered. (photo courtesy of LASD)

Deputies from the West Hollywood Sheriff’s Station arrest­ed a man and a woman on July 8 who they believe are responsible for a series of cell phone thefts in the city’s nightlife and entertain­ment district.

Capt. Bill Moulder said members of the station’s Entertainment Police Team saw the two suspects at approximately 1:45 a.m. acting suspiciously near the corner of Santa Monica and Robertson boule­vards. The deputies recognized the man from security camera videos taken at bars showing previous pickpocketing incidents. When deputies approached, the female victim allegedly tossed a stolen phone behind a dumpster in an alley, Moulder said. Authorities confiscated 17 phones from the sus­pects – five of which were returned to their owners the following day.

“[Cell phone theft] has certainly increased over the last year. We’ve been seeing a lot of it in the bars and nightclubs and are doing sever­al things to address it,” Moulder added. “That includes undercover operations. Deputies in plain clothes and in uniform going into bars and looking for suspects. The Narcotics Bureau did an operation with our Entertainment Policing Team and COPPS Team, and we had an undercover operation with the [sheriff’s department’s] Major Crimes Bureau. We are doing regu­lar foot beats and placing deputies in strategic locations to get eyes on things.”

The suspects were identified as Willy Anderson Martinez-Vega, 38, of Upland, and Karen Duarte-Vargas, 21, of Paramount. Moulder said the crimes remain under inves­tigation and the suspects are facing burglary, grand theft, receiving stolen property and conspiracy charges. He did not know where and when the phones were stolen, or if the suspects were at a specific bar or nightclub.

He cautioned people visiting bars and nightclubs in West Hollywood to remain aware of their surround­ings and personal belongings. Phones in back pockets or left on counters can easily be stolen in crowded locations, authorities said.

Moulder added that all personnel at the station are undergoing train­ing for undercover operations and more efforts are planned to reduce thefts.

Anyone whose cell phone was stolen in West Hollywood is urged to call the sheriff’s station at (310)855-8850.