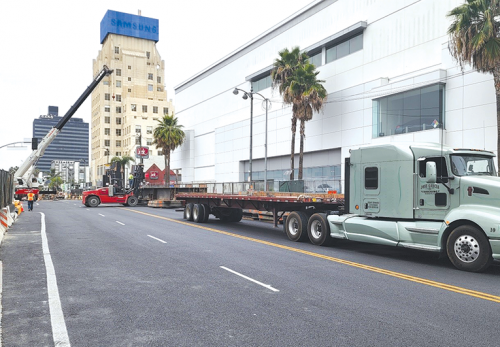 Wilshire Boulevard was recently repaved between Highland and La Brea Avenues after the street was restored as part of Metro’s subway project. (photo courtesy of Metro)

Wilshire Boulevard was recently repaved between Highland La Brea Avenues after decking was removed street restoration work was completed. Construction of the station entrance in the north La Brea staging yard will continue through September and Wilshire Boulevard will continue to be reduced to two lanes in each direction between Orange Drive and Detroit Street. The Wilshire/La Brea station, as well as the Wilshire/Fairfax and Wilshire/La Cienega stations, are part of the first phase of the subway project anticipated to open in 2024.

Crews also continue to work at and around the Wilshire/Fairfax station. A K-rail work zone in the middle of Wilshire Boulevard between Courtyard Place and Masselin Avenue supports construction in the tunnels and will be in place through January 2024. Wilshire Boulevard has reduced to two lanes in each direction between Ridgely Drive and Curson Avenue in the Miracle Mile. A construction work zone also remains in place near Wilshire/Fairfax, where crews are working on underground rooms and passageways adjacent to the future station.

Father west, Wilshire Boulevard her been reduced to two lanes in each direction to support work near Wilshire/La Jolla. A K-rail work zone is in place for the construction of a cross passage between the twin subway tunnels.

Concrete and material deliveries are ongoing at the La Cienega and Gale staging yards for the Wilshire/La Cienega station. Lanes will be intermittently reduced as necessary on Wilshire Boulevard between La Cienega and San Vicente boulevards.

Metro has announced that crews have made significant progress in building the concourse level at the Wilshire/Rodeo subway station in Beverly Hills. The work involves installing shoring framework and rebar, as well as pouring concrete.

Backfilling work for the station is also ongoing along Wilshire Boulevard between Linden and McCarty drives, and it is anticipated to last approximately one to three more weeks. Work hours are 8 a.m.-11 p.m., Monday through Friday. At least one lane in each direction on Wilshire Boulevard will be closed.

For questions and concerns, call (213)922-6934, email the project team at purplelineext@metro.net, or visit metro.net.