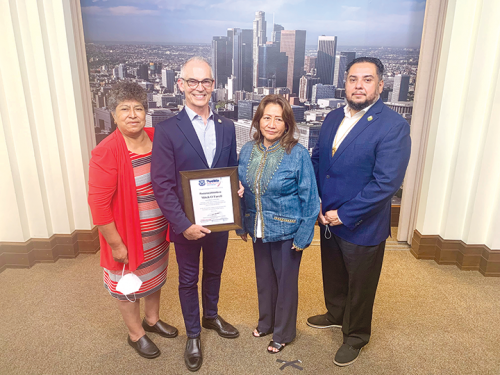 Council President Pro Tempore Mitch O’Farrell, second from left, was honored for his support of the city and state of Puebla, as well as street vending in Los Angeles. He was joined by Merced Sanchez, left, street vending community leader; Haydee Sanchez, executive director of Centro Cultural Tenchantit; and Rudy Ortega, president of the Fernandeno Tataviam Band of Mission Indians. (photo courtesy of the 13th District council office)

Los Angeles City Council President Pro Tempore Mitch O’Farrell, 13th District, was recognized on June 30 by the Mexican city and state of Puebla for his longtime advocacy on behalf of Los Angeles’ Indigenous and immigrant communities, including street vendors.

The recognition was organized by President Eduardo Rivera Pérez of Ciudad Puebla and Merced Sanchez, a local street vending leader in Los Angeles, and featured president Rudy Ortega of the Fernandeño Tataviam Band of Mission Indians, who led a land acknowledgement. Also joining the ceremony was Chief Elsa De La Cruz Martinez, of the Mazahua Tribe; Manolo Herrera Rojas, of the city of Puebla; and members of the local Mayan community, led by Haydee Sanchez.

“I am deeply honored to receive this honor from our friends in Puebla,” O’Farrell said. “It is very humbling to be recognized for my work with street vendors, Indigenous and immigrant communities because these efforts are greater than each of us. Our work is aimed at uplifting those in need and celebrating the rich and beautiful diversity that is Los Angeles. That such an important city and state in Mexico would know of and acknowledge our work underscores that the progress we make here in Los Angeles can resonate across the globe.”