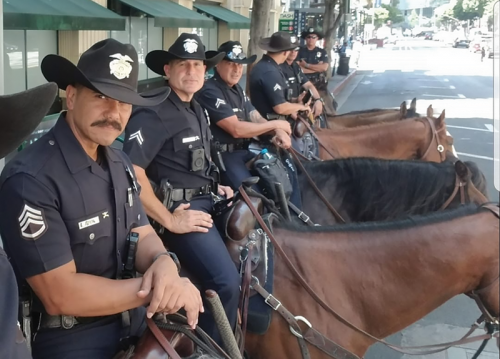 Bike, foot and horse patrols are being utilized in the Melrose shopping district to increase public safety. (photo courtesy of the LAPD)

After months of crime problems in the Melrose area, public safety in the popular shopping district has been improving through a combination of police deployments and community partnerships, residents and law enforcement officials reported.

Los Angeles Police Department Chief Michel Moore said those deployments will continue as the busy summer tourist season gets into full swing, and visitors can expect a robust police presence with foot beats, bike and horse patrols and police vehicles. Moore joined the nonprofit neighborhood advocacy group Melrose Action for a virtual meeting on June 29 to outline the plans and recognize positive partnerships in the Melrose District.

“Your leadership out there, your work over the last year, has absolutely made a difference, not just in perception, but in reality,” Moore told the local police personnel and residents attending the meeting. “If you would have asked me four years ago, ‘Would we have three murders in the Melrose corridor?’ … I would say, ‘This doesn’t happen. That’s the not the Melrose we had grown accustomed to.’ And to see the follow-home robberies, the follow-up robberies, the smash and grabs, the store robberies, the break-ins to vehicles, just to see the sense of safety eroded so significantly during the last two years shook us all. From the department’s standpoint, it was a challenge, because at the same time during this COVID pandemic, we saw our resources plummet. Despite a smaller workforce, higher demands for resources, a more violent community, I believe the Melrose corridor has demonstrated how public safety can work … when we roll our sleeves up and work together.”

Moore commended Melrose Action for taking the lead in organizing the community and spearheading a program to install license plate-reading cameras in the Melrose area. Approximately 20 cameras were installed last December after Melrose Action raised more than $30,000. The organization is raising more money at gofundme.com/f/melroseaction to place additional cameras along the corridor west of Fairfax Avenue. Moore said Melrose Action’s camera program could be a model throughout the city.

“We are solving crimes daily on the basis of video that we’re capturing from residential cameras,” Moore said. “The automated license plate readers … support the public surveillance of open public areas, so that when something happens, we can do what people expect us to do, which is solve the crime, bring the persons responsible to justice.”

Moore added that the department plans to continue what’s already working with public safety, and will devote a variety of resources this summer, including the horse patrols, which are highly visible and popular with visitors. He said the focus will remain on preventing violent crime as well property crimes such as vehicle burglaries and thefts.

“The success of the Melrose corridor is the success of Los Angeles. The Melrose corridor is up there with Venice Beach, Hollywood Boulevard, it’s a destination people come to experience. We have, as we do with those other corridors, ensured we are visible, that we are accessible and that we are mindful of how the criminal element is preying on opportunities. I am encouraged by the work that has been done.”

Peter Nichols, co-founder of Melrose Action, said he was impressed by the chief of police’s message and is optimistic the crime problem in the Melrose area will continue to improve. He added that he has received an outpouring of requests for information about the license plate-reading cameras.

“I’ve had inquiries from so many communities that heard about what we were doing. I have spoken to people throughout the city and the country, in Germany, Sweden and France,” Nichols said. “I am humbled by all the interest there has been on how a community can coalesce and use crowd source funding to make a difference for everyone.”

Nichols added that it is important that the LAPD continue to provide a highly-visible police presence in the area, as crime tends to increase during the summer months. Some business owners agreed that crime has decreased, but insisted that the police deployments must continue so the trend is not reversed.

“I’ve definitely seen more police presence by way of foot patrols, officers on horseback and officers in car patrols,” said Isack Fadlon, owner of Sportie L.A., a shoes and apparel store at 7753 Melrose Ave. “Have we seen a decrease in crime? I don’t have the statistics in front of me, but it appears to be so. We’ve had some issues with squatting and vandalism, but have we seen more police presence and a decrease in crime? I’d say yes.”

Moore added that the department will be focused on engaging with people and welcomed more partnerships with Melrose Action and similar groups.

“To continue our partnership and to work with you is critical to our success,” Moore said. “The more we all work together, the more we all lean in on this, the more we don’t accept the status quo [the better]. We need to look at what things are getting better, what are the things that are dragging it down and what can we do as a plan of action to move forward.”

The election results are in