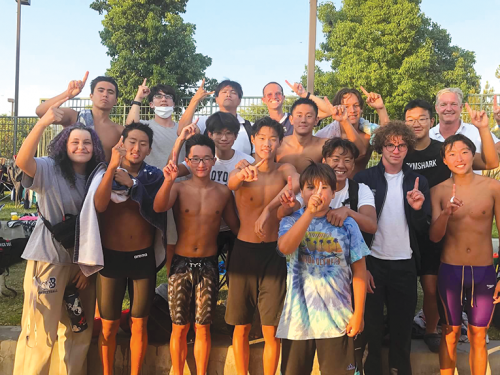 The BLAST Sharks swimmers are preparing for the Southern California Junior Olympic Championships from July 21-24 in Riverside. The swimmers won first place at the event in 2021, which was held at the Santa Clarita Aquatic Center.

BLAST, an acronym for Burbank-Los Angeles Swim Team, is a high-performance youth swim team (ages 5-19) that practices at the pool at the new West Hollywood Aquatics Center, as well as pools in Hancock Park, Culver City and Burbank. The Southern California Junior Olympics Championships, one of the most competitive swim meets in the West, was canceled in 2020 because of the COVID-19 pandem­ic.

Teams all over the county were forced to get creative to keep their swimmers motivated and in shape during pandemic lock-downs and pool closures. Once pools reopened, other challenges such as pool chemicals and lifeguard short­ages impacted BLAST’s swim­mers’ ability to practice, BLAST head coach Peter Lambert said.

“The fact that the BLAST swim­mers triumphed through these hard­ships and won this Junior Olympic meet is a credit to the swimmers, parents and the coaches,” Lambert added. “We are very proud of our swimmers, especially since BLAST did not have access to a pool during the first and second wave of the pandemic. The team trained via Zoom and YouTube with coach-led land workouts. Our coaches and swimmers’ hard work and dedica­tion during this stressful time allowed the team to build on their earlier training once pools reopened. They came back ready to swim and ready to race.”