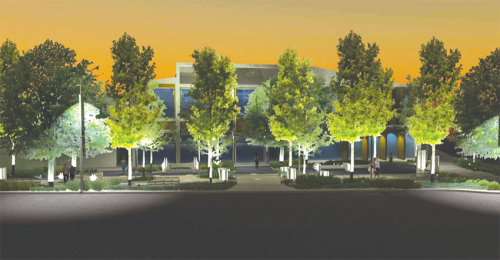 A new public gathering place and gateway to the West Hollywood Design District is included at a city-owned parking lot at Beverly and Robertson boulevards. (rendering courtesy of the city of West Hollywood)

The city of West Hollywood has started work on the Design District Streetscape and Undergrounding Project.

The major infrastructure project is part of the West Hollywood Design District Streetscape Master Plan, which was created to improve the overall aesthetics and mobility of the Design District, near Robertson Boulevard and Melrose Avenue. The goal is to strengthen the economic vitality of the district. Key features of the project include pedestrian and bicycle safety improvements, new pavement and sidewalks, 40 new trees and upgraded landscaping, upgraded street furniture and streetlights, smart city infrastructure, new underground utilities and new public gathering places with integrated public art.

Construction on underground utilities began in April near Melrose Avenue and Doheny Drive and is moving east toward Robertson Boulevard. New underground conduits and vaults are being installed for Southern California Edison, Charter Communications and AT&T. When completed, overhead wires and power poles will be removed, and new roadway paving and striping will be installed.

Impacts during construction include parking restrictions, temporary traffic lane closures and the temporary narrowing of pedestrian walkways, as well as noise and the removal or alteration of some temporary outdoor dining (OUT Zone) areas. All businesses will remain open during construction and public parking will be available at the West Hollywood Park structure, located at 625 N. San Vicente Blvd.

The first phase of the utility work is expected to be completed in October, the second phase by April 2023 and the overall completion of the Design District streetscape project by June 2023.

Dance With Films 25 set for June 9