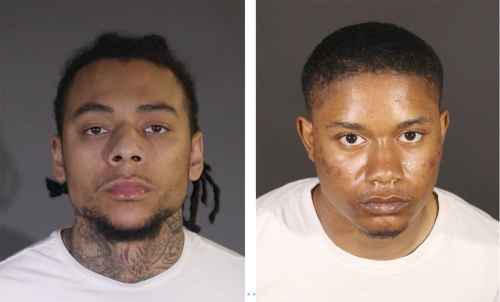 Artiz Alvarez, left, and Chanz Lee Yarbrough have been arrested and charged for an April 20 robbery on Coldwater Canyon Drive. (photo courtesy of the LAPD)

The Los Angeles Police Department’s Follow-Home Robbery Task Force has arrested two suspects who allegedly robbed a group of men on April 20 after following them from a restaurant in Beverly Grove to a rented home on Coldwater Canyon Drive.

Authorities said they solved the case after one suspect accidentally shot one of the other suspects later outside an apartment in east Hollywood, and the injured man went to a hospital seeking treatment. A third suspect is still being sought by police.

The robbery was reported at approximately 12:45 a.m. on April 20 at a residence in the 2400 block of Coldwater Canyon Drive. Police said the victims, four men visiting from Northern California, were driving to their Airbnb and noticed a vehicle following them. As a precaution, they drove past their residence, made a U-turn and drove back to the rented home. Three suspects pulled up in a vehicle, exited and confronted the victims. Two of the suspects were armed with handguns, while the other had a rifle, police said.

The suspects demanded jewelry and forced the men inside the residence. One of the suspects pistol-whipped a victim, police said. After ordering the victims to lay on ground in the living room, the suspects ransacked the home, stole property and fled. The victims reported the robbery to the police.

Authorities said the victims had dined on Third Street in Beverly Grove but did not divulge the restaurant’s name or where the suspects allegedly started following them.

At approximately 1:15 a.m. on April 20, police in Hollywood received a call about a gunshot in the 100 block of South Virgil Avenue. When officers arrived, they found a blood trail leading to a nearby apartment. When they entered, nobody was inside. Police obtained a warrant and searched the residence, and they found items allegedly stolen in the robbery on Coldwater Canyon Drive, as well as three firearms – two semi-automatic handguns and an AR-style rifle.

At approximately 2:15 a.m., a 21-year-old man went to a hospital with a gunshot wound to the leg. Police said he told staff that he had been shot in Hollywood, but didn’t know where or who shot him. Detectives investigating the shooting on Virgil Avenue determined the man in the hospital, Chanz Lee Yarbrough, had been shot by one of the other suspects in the Coldwater Canyon robbery as they unloaded their vehicle. The suspects allegedly left the apartment to drop Yarbrough off at the hospital.

Police are still searching for the third suspect, who was only described as a Hispanic man. Detectives released photographs of the suspects who were arrested because they believe they may have committed other crimes against additional victims.

Anyone with information about the robbery or additional crimes involving the suspects is asked to call the Follow Home Robbery Task Force at (213)486-6840.