Here comes another reboot-sequel, or requel, to those who use the word “listicle” without cringing. But like “Blade Runner 2049,” “Creed” and plenty of horror offerings, the outcome is shocking, magnificent. This bodes poorly for original storytelling, but don’t blame “Top Gun: Maverick.”

It might be a symptom of a larger industry frustration, but “Top Gun 2” also reignites some aviation love for a new generation. There’s plenty of nostalgia – quick cuts to the original, a heartfelt cameo – but this story survives on its own.

Don’t expect much nuance. The villain goes unnamed, somehow acquiring fifth-gen fighter planes best avoided, never confronted in a dog fight. Mav (the immortal Tom Cruise) must train a new batch of the Navy’s finest to complete an impossible mission only he has the skills to teach.

But he’s no teacher. At least he cares little for such responsibly, refusing advancement. Pete Mitchell is still a captain, one who made plenty of enemies along the way. His original frenemy, Iceman (Val Kilmer), remains on his side, but that only goes so far when top dog Admiral Beau Simpson (Jon Hamm) prefers more compliant officers.

But Mav gets results, though mission training triggers old wounds surrounding the death of his former radar intercept officer, Goose, whose son Bradley (Miles Teller) now hopes to be the best. But he holds a grudge against Mav (but not for what you might expect).

This is a well-treaded plot, but it’s so effectively composed, thanks to a huge creative team and director Joseph Kosinski (“Tron: Legacy,” “Oblivion”), presenting his best feature to date. Add to crisp writing, insane aviation sequences and stunts. If you know Cruise, you know his affinity for practical effects, ones fulfilled by a massive $170-million budget (already recouped in ticket sales).

Check out all the behind-the-scenes materials and various feature articles for a full rundown on the production. Let’s just say, regardless of Cruise’s personality or associations, he makes good films (“The Mummy” excluded) that sport some impressive feats.

As for “Maverick’s” connection to the original, flashbacks and familiar songs help out. There’s even a beach football scene in lieu of the volleyball scene that gave moviegoers funny feelings 36 years ago. Alas, no substitute for Mav-Ice homoerotics. Mav merely butts heads with a couple higher ups, while Bradley and fellow lieutenant Jake Seresin (Glen Powell), the cocky one, constantly fight sans any semblance of a Kilmer air bite, and all the subtext that comes with it. 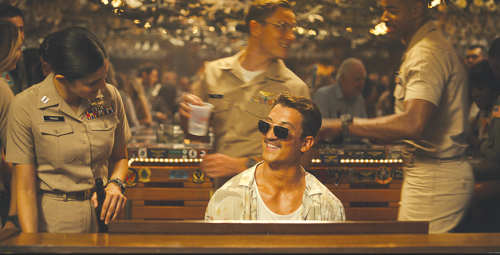 Bradley (Miles Teller), the son of Goose in the original film, hopes to be the best in “Top Gun: Maverick.” (photo courtesy of Paramount Pictures)

Cruise plays a more strait-laced figure, confident without need to argue, beaten down by years of regret. He knows the role well, not merely from this flick’s predecessor but the many, many that pepper his resume. You know how it goes: if ain’t broke.

As for characters, few originals return. Past love interest Charlie (Kelly McGillis) isn’t even mentioned. The only hints of what transpired are built into how little Mav seems to have changed. He loves to fly and goes where that takes him.

The latest romantic entanglement Penny Benjamin (Jennifer Connelly) – a character reference back in 1986 – proves our ace’s commitment issues through their on-again-off-again encounters. In essence, Captain Mitchell has been on pause for more than three decades waiting to live his life until this moment.

Certainly, this isn’t the same hothead. He cares less about shutting down bars, but he still ignores direct orders, though his own ego occasionally aligns with the greater good. Come the events of “Maverick,” he’s isolated, on his last mission, at a crossroad.

Even the apple of his eye has a daughter, prompting him to ponder the ramifications of certain choices. And the one Kilmer sequence does Iceman right, bringing in Kilmer’s throat cancer that claimed his voice five years ago.

That’s both true of the characters and how rebooted sequels must handle their characters. “Star Wars: The Force Awakens” enlivened a franchise at the expense of Han Solo’s happy ending, after all. Should “Maverick” spark more entries, all characters might leave behind the satisfying conclusions found here.

That’s not a dig on the film, more an observation about how sequels after long dormancies function. Again, this one survives on its own, regardless of what happens next. Until then, “Top Gun: Maverick” tops the summer movie season thus far. And the intense, raw flight sequences warrant an IMAX viewing alone. It’s an unexpected piece of popcorn movie gold.

Bakers and pie lovers come together for BH Piesta

‘Hotter Up Close,’ screens at Dances With Films