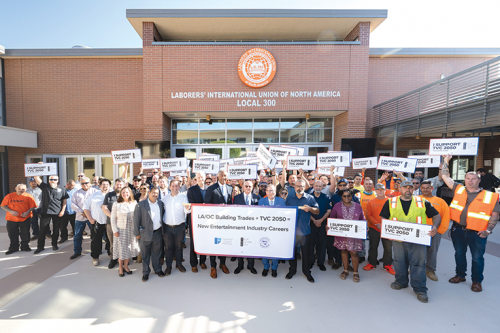 City officials and representatives of Hackman Capital Partners, owner of Television City, joined members of the Los Angeles/Orange Counties Building and Constructions Trades Council to celebrate the signing of a union labor contract for work on the TVC 2050 project. (photo by Gary Leonard)

Television City, an affiliate of Hackman Capital Partners operated in partnership with the MBS Group, announced the signing of a project labor agreement on June 1 with the Los Angeles/Orange Counties Building and Constructions Trades Council for the proposed TVC 2050 project, which provides a framework to modernize and expand production facilities at the Fairfax District studio lot.

“I was proud to stand alongside the skilled tradesmen and women of Building Trades who have made Los Angeles the prosperous city it is today,” Koretz said. “I congratulate Television City and Hackman Capital Partners for signing a PLA on TVC 2050, ensuring thousands of good jobs with family-supporting union wages to help grow our city’s economy and reaffirm Los Angeles’ position as the entertainment capital of the world.”

“Let’s get this built, L.A. needs more sound stages to keep our economy strong. And the Building Trades has the skilled women and men to construct these stages to the quality the entertainment industry demands,” said Chris Hannan, executive secretary of the Los Angeles/Orange Counties Building and Construction Trades Council. “I want to thank Television City and Hackman Capital Partners for forging a PLA, which recognizes the benefits of building with union labor.”

TVC 2050 is a long-term project that will balance economic growth, community input and historic preservation, allowing Television City to meet the constantly evolving physical and technological demands of the entertainment industry and reaffirm the studio’s role as a job center in Los Angeles.

“Los Angeles lacks the modern sound stages and production facilities to meet market demand and we need to invest in our city’s most identifiable industry,” said Michael Hackman, founder and CEO of Hackman Capital Partners. “Television City is one of the great Hollywood studio lots and we’re proud to partner with the LA/OC Building Trades on TVC 2050 to ensure that it will remain a robust job creator and world-class studio for decades to come.”