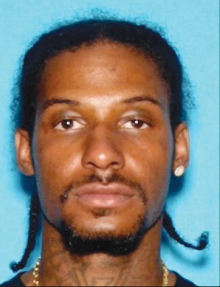 A 32-year-old suspect wanted in connection with a double murder in Hollywood was arrested on June 22 in the city of Hesperia.

Authorities with the LAPD/FBI Fugitive Task Force had been searching for Marvin Francell Williams after he allegedly shot and killed two people on June 16 in the 6100 block of Carlos Avenue. On June 22, members of the task force received information that Williams was at a residence in Hesperia, located in San Bernardino County, and notified authorities there about his whereabouts.

San Bernardino County authorities conducted surveillance at the residence and waited for task force members from Los Angeles to arrive. At approximately 6:30 p.m., Williams exited the residence, got into a vehicle and drove away, police said. Authorities pulled him over and took him into custody without incident. Williams was turned over to the LAPD/FBI Fugitive Task Force and brought to Los Angeles, where he was booked for murder and is being held without bail.

Williams, of Compton, is accused of murdering Nadia Campbell, 35, and Ajani Patridge, 40. Police said Williams was in a dating relationship with Campbell, and they believe the homicides were the result of domestic violence.

Authorities did not divulge how they determined Williams was at the residence in Hesperia. The homicides remain under investigation.

Anyone with further information is urged to call the LAPD’s West Bureau Homicide Unit at (213)382-9470.